The mardi gras beads were still dangling from giant oak trees when we arrived in New Orleans at the end of March. A local African American artist explains to me that as a kid on the streets during Mardi Gras, he’d shout, “over here! Hey mister throw some beads over here!” and glanced at the throngs of people catching fistfuls of the shiny necklaces and doubloons. He moved into the crowd of white people and crouched down.

He finally started catching some bling– right before getting yelled at and chased away. The good times are rolling for some, but not for all. 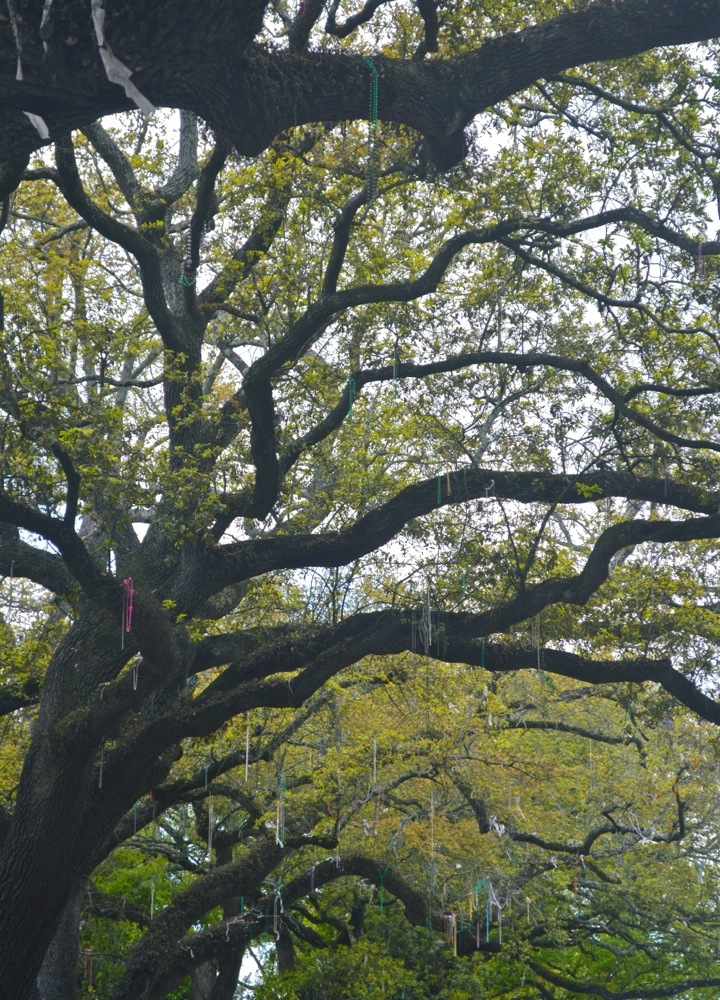 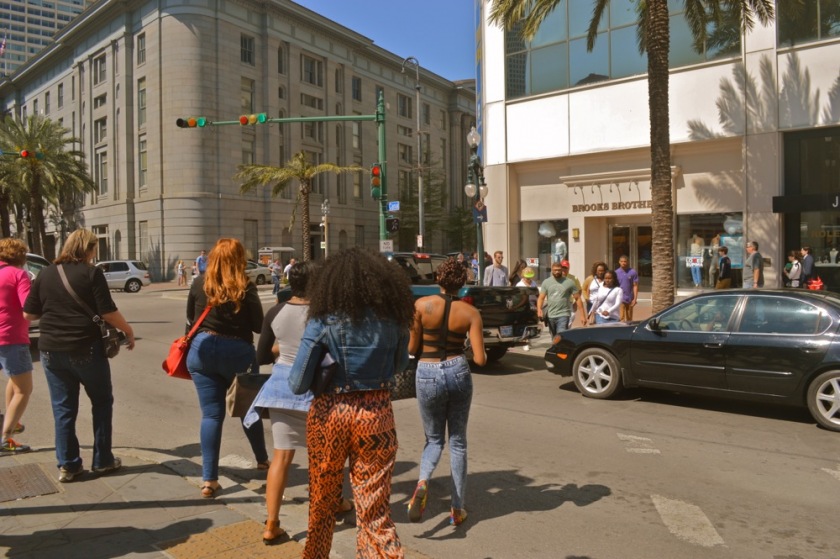 Jackson Square in the French Quarter is the place to be, especially on the weekends. 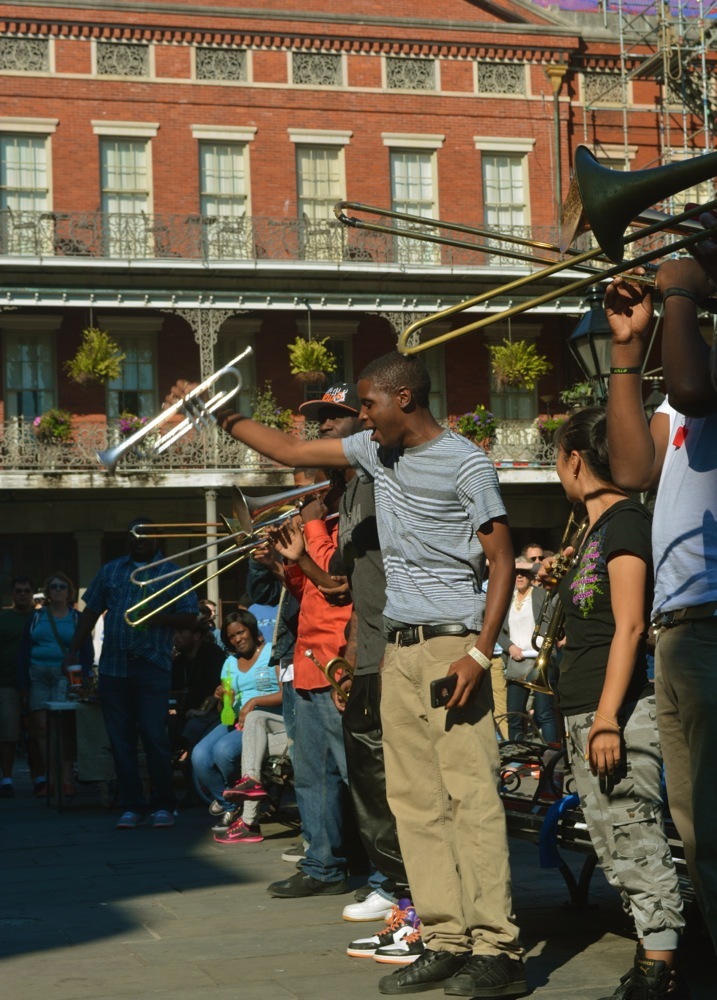 Across the street from the gurgling gray Mississippi, brass bands jam out to the crowds, street acts crop up and Jackson Square’s wrought iron fence is decked out with every kind of local art: prints, paintings, acrylic-on-Katrina-scrap-wood, and my personal favorite, a kid in art school who buys old records and spray paints his own designs onto them with homemade stencils:

Even the art in the galleries and museums amazed me:

Black and white piece by Steve Prince, a NOLA native and self proclaimed “art evangelist.” This is currently hanging in a museum in New Orleans. It’s something like 14 feet long. His work can be found at http://www.eyekons.com/steve_prince

The French quarter is made up of old buildings where ivy falls from balconies and horse drawn carriages wheel past voodoo shops, art galleries and restaurants. You can get cocktails to go, or buy a spell to make someone fall in love with you while you bite into your muffaletta sandwich from Central Grocery at 923 Decatur. You know, all in a day’s work. 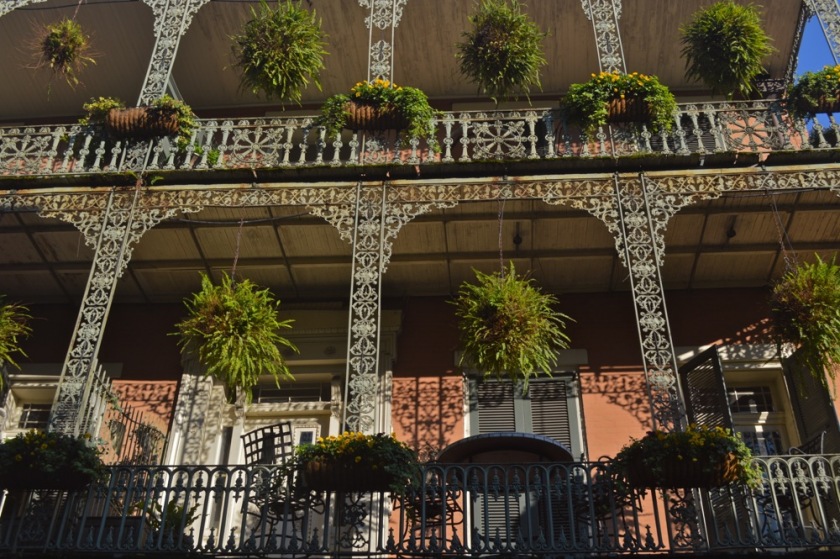 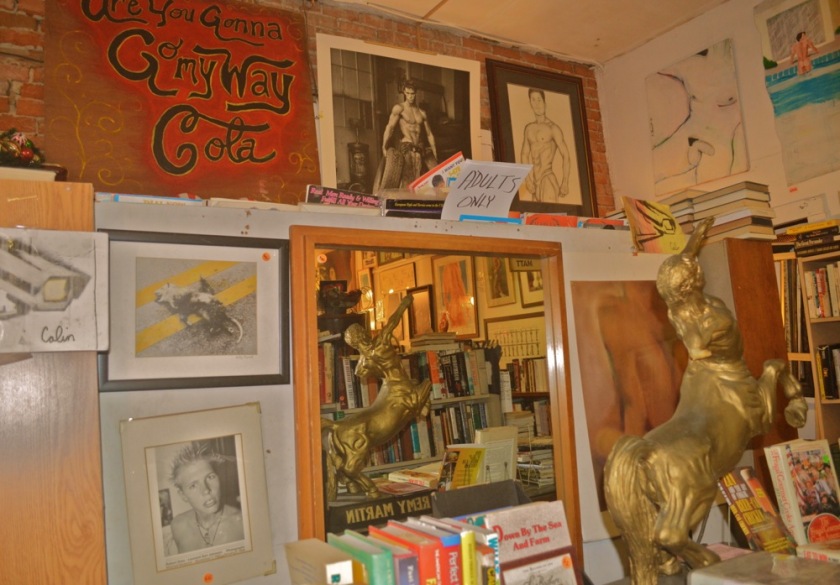 We took the streetcar out out west on St Charles through the Garden District. An all-day pass on any of the streetcars is $3.00 and you can get on and off as many times as you want.

See the monkeys in the trees? 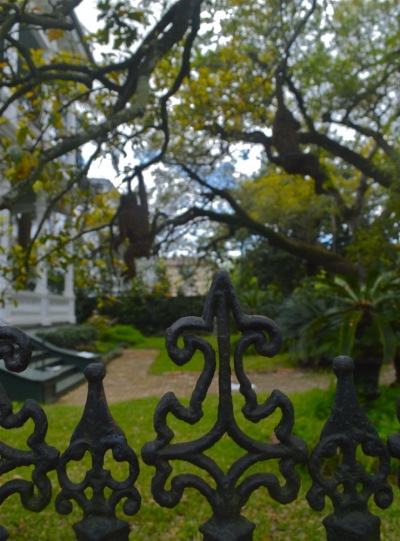 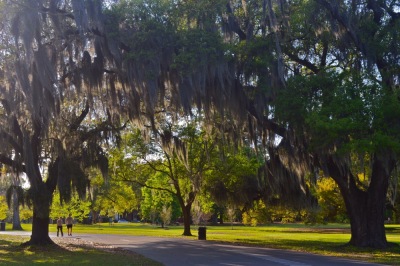 Stately mansions with regal white pillars and giant oak trees flank St Charles. We get off in front of Tulane and Loyola University and wander through Aububon Park, with its fountain, lake and jogging trails.

Along the St Charles street car route is the Blind Pelican at 1628 St Charles. In addition to these crawfish, they have 25 cent oysters during happy hour from 4-8. And this deal of the century is spray painted on their concrete wall, so fear not, you have time!

So yeah, the food in New Orleans is kind of a big deal. I scouredTrip Advisor and chose Herbsaint as one of our first classier joints, owned by a renown restauranteur of the city who also runs Peche and other much fussed over haunts.

The only redeeming taste of Herbsaint came from the cocktail. Our appetizer of ” louisiana shrimp with calsparra rice (?) artichoke and maitake mushrooms” was so salty we had no choice but to order another of their beautilicious cocktails. Oh the Steel Hibiscus! Ohh em geee! It’s made with a new liquor that just hit the market called Sorel. From their website, Sorel has “the brightness of Brazilian clove. The warmth of Indonesian cassia. The heat of Nigerian ginger. The woody bottom of Indonesian nutmeg. The full, aromatic body of Moroccan hibiscus.” Whatever. I just want to get my paws on some!

The next night we chose Canal Street Bistro in Mid-City, which is way up Canal Street on the streetcar ($1.25 each way or $3 all day) and located in an old house. Not somewhere you’d expect a classy kitchen. I’m sorry we skipped the Drunken Mussles appetizer with “PEI mussels and tequila-chilpotle butter sauce” and the Lamb Chille Relleno “spiced roasted leg of lamb, roasted poblano chile, blackberry coulis, griddled cheese, pecan cream.”  But we chose well with the roasted quail in mole sauce and cactus salad. Oh, and the key lime martinis (on the left with all dat cream!) were like dessert. Killer.

Cafe Carmo in the CBD serves tropical themed local produce based dishes. Everything we had was delicious. They have a juice bar too and they even juice cacao, the plant used to make chocolate. I loved their bread less sandwich “made of a grilled plantain patty topped with melted cheese, spicy smoked ‘n’ pulled pork, avocado, salsa fresca and our tangy sweet spicy “Rico” sauce. Served with organic greens drizzled and with mango vinaigrette.” Uh, yum!

The coffee at Carmo is infused with chicory root. Is that a southern thing? I ask the waitress. She thinks it’s just a New Orleans thing. Whoever’s thing it is, it’s delicious and that’s coming from someone who’s not into being “experimental” with her cuppa joe.

The crowd may be New Age but the food is for all ages and all taste buds who appreciate eclectic equatorial goodness.

Bennigan’s is a BYOB in the French Quarter that serves up West African food. We tried the Jama Jama Ni Makondo, “sauteed spinach, fried ripe plantains, and coconut rice.” I’m a sucker for fried plantains, so I loved it. Just don’t use the bathroom, because you have to walk past the sullen faced kitchen crew cutting up meat in a tiny room with giant bags of dinner rolls slumped over the cutting boards.

My favorite place to go out at night for music and drinks was Frenchman Street, home of the Spotted Cat nightclub. But you can browse something like ten different bars with live bands jamming out as you squeeze through the crowds and street performers. There’s no cover charge anywhere, so you can take your drink out of one bar and cruise the street scoping out the next one. Or hit up the night market off Frenchman Street for some locally made art and souvenirs. Or spend twenty minutes talking to a traveling kid who uses an old busted out TV and a long roll of paper and two dowels that twirl to showcase his “movie.” He sings his own soundtrack from behind the contraption like a live orchestra, while he twirls the dowels and the story streams through the TV screen.

So basically unless you hate endless bars with free music and cheap drinks, tons of restaurants of every style and caliber, historic buildings and horses pulling carriages while dudes wail on saxophones at dusk under tumbling wisteria, New Orleans is for you.