In San Francisco art goes feral and crawls outside. It’s everywhere and it will find you. First at Dolores Park, sloping lawn and date palms that don’t make dates, where people munch vegan take out and speak in falsetto to expensive dogs. Very unlike Santa Cruz, where cool kids walk their dirty grinning pooches on surfboard leashes. While skateboarding. But anyway. 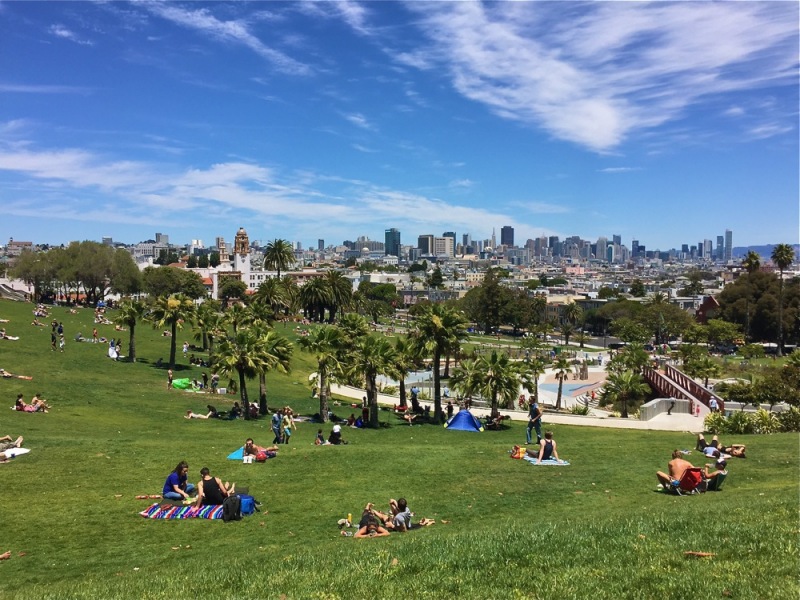 Dolores Park has been redone recently and you can no longer bathe in the bathrooms. 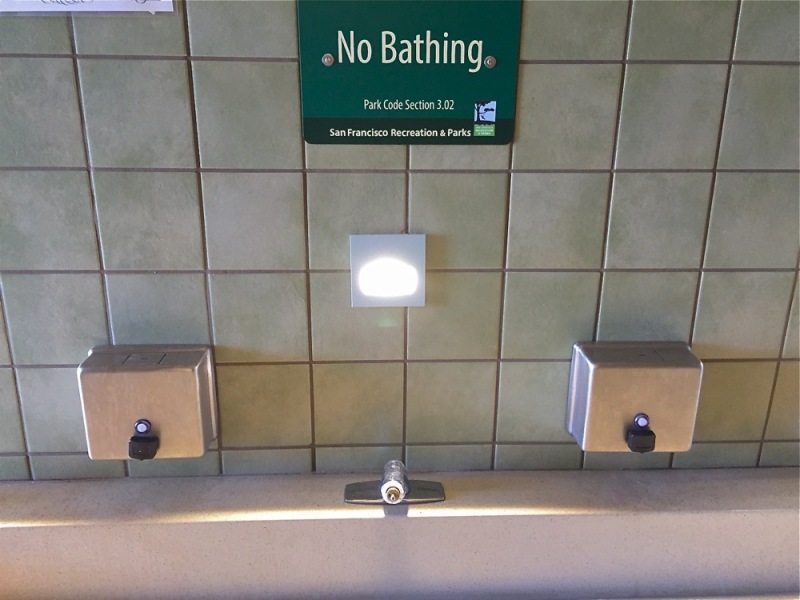 We get sucked into the gravity of A Random Art Project just by scrunching up our faces and staring at this group of guys and all their strewn paint bottles. Not getting out of this one. Kate gets a blue streak to show for it, which may have looked like the sunrise of a new trend. One of the guys exploded a paint filled balloon next to her while explaining, these just won’t pop! and she caught some crossfire. But no harm. I think she liked it. 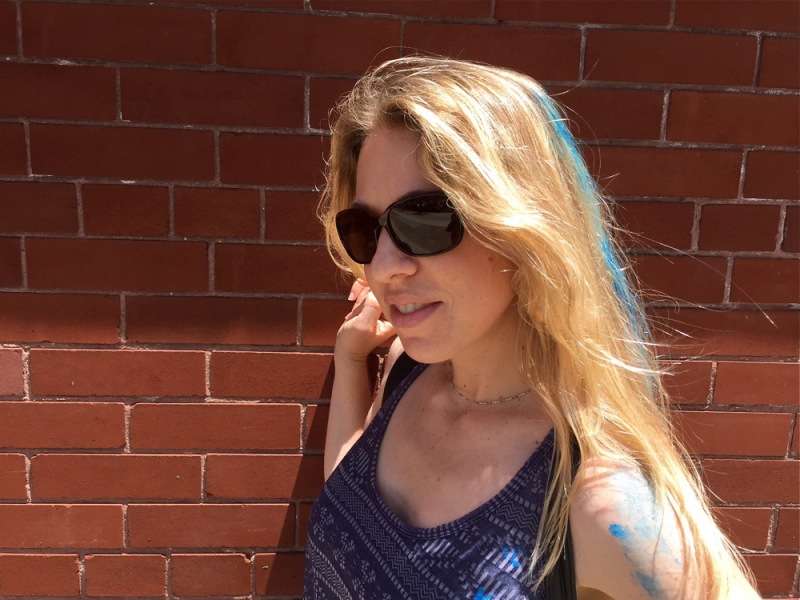 We woke up kinda hungover this morning, one of the guys is saying.

Three dudes. Clean clothes. Roommates. One works in IT, one moved here last week. (I couldn’t have made up a more San Francisco-esque nugget if I tried)

And then something about reading the morning paper: 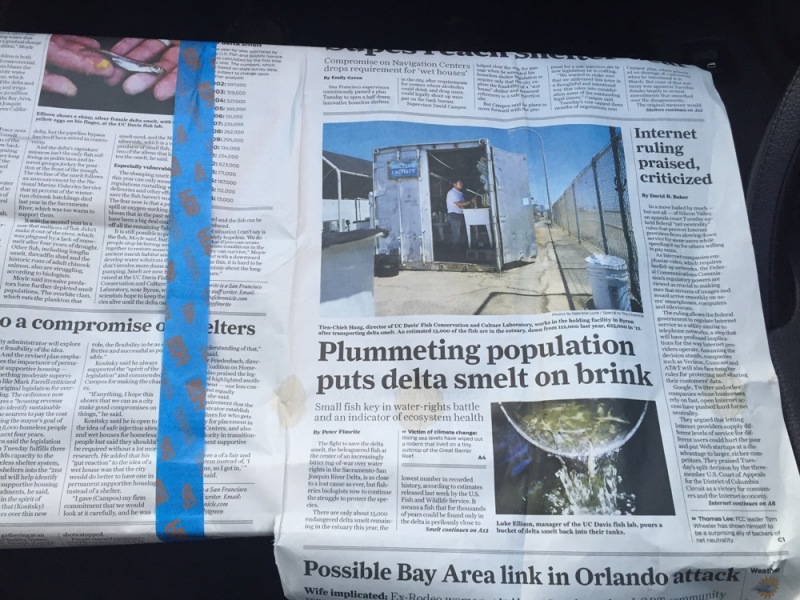 The world is such a hole. Let’s do something the opposite of bad news.

And so there we were, big smiles kneeling down to fling, splash and carefully apply paint. 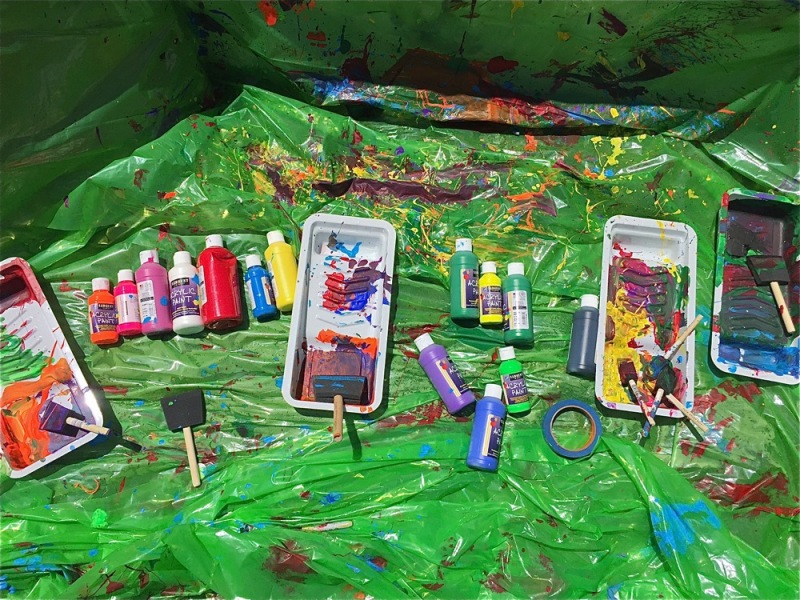 We even picked up our canvasses later. At their house. For free. Donations towards more art supplies are appreciated, but I said I’d write about it instead so I weaseled out of that one. Find them on Instagram at #arandomartproject and see where they’ve come since that first day, um, a week ago, inspiring innocent bystanders to let their creative juices spill.

When me and Blue Streak got away, we wandered down to the Mission. She declared it haunted. May be. I’m don’t know anything about the Women’s Building there except I gawked at their murals: 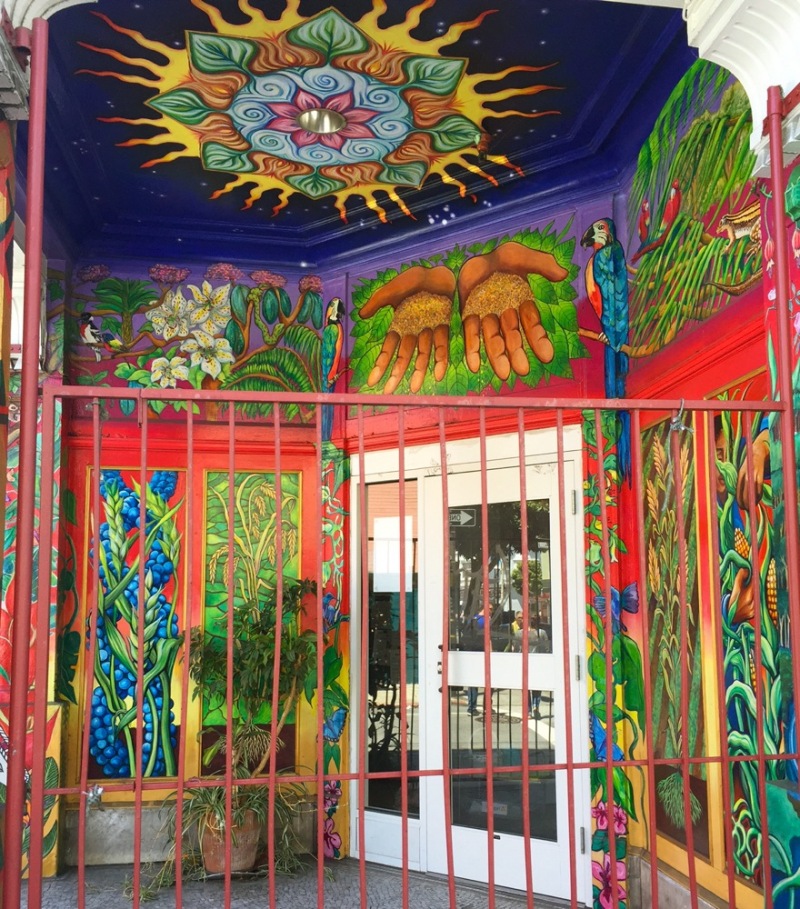 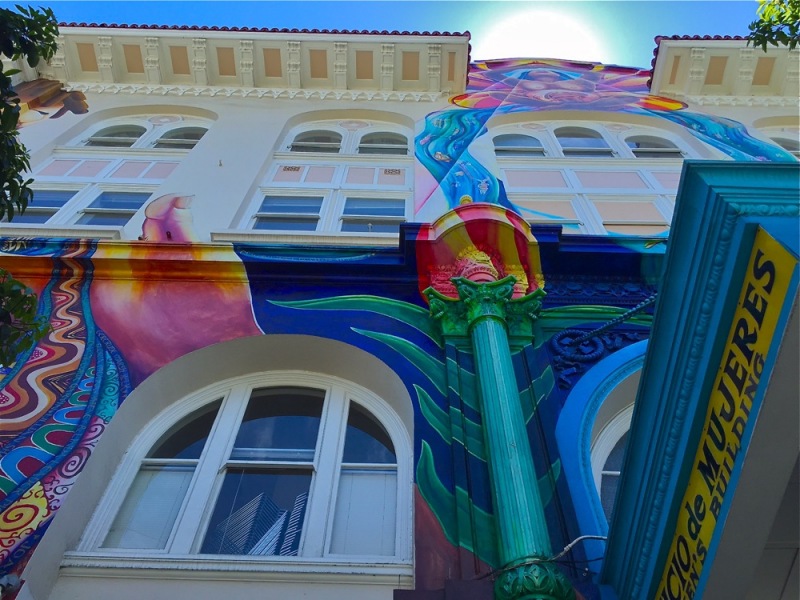 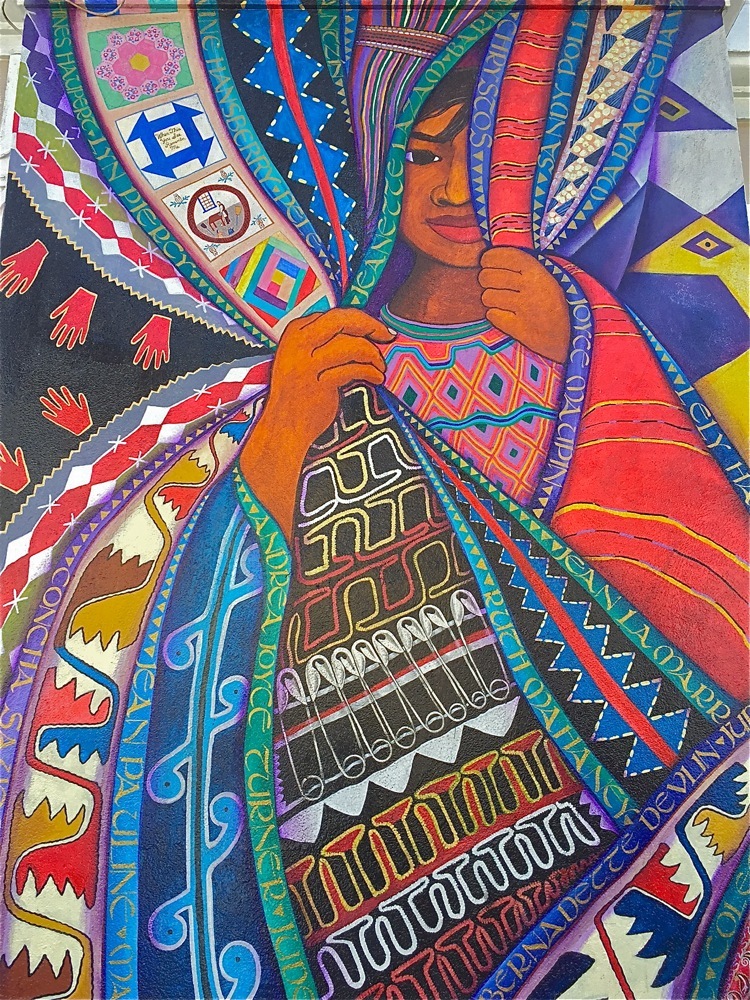 Art like that would choke inside. It needs to be free and outdoors and open to the elements like a drifter.

Later we pulled up to Land’s End, a colony of cypress on golden cliffs near the bridge. There’s a museum/gift shop now (this park has also been re-done, alert transients no bathing here either) with a tribute to the frayed eccentricity of the deceased Sutro Baths, serviced by an ill fated train line in constant repair due to its coziness with the constant muscle of the Pacific.

My dad says there was a mummy under the glasshouse roofs of the Sutro Baths. Which was built with 100,000 feet of glass and 270,000 cubic feet of concrete. And of course there was the fortune teller. And something like one humped Tom, did I get that right Dad? The first midget employed for entertainment.

According to the inter ethers, the Baths were home to ancient Egyptian curios, Native American woodwork, Japanese swords, Aztec pottery and Alaskan totems. Keep in mind this structure, built by the former mayor of SF, was the largest indoor swimming extravaganza in the world, with slides, trapezes and a capacity of 25,000 people, fed by high tide waves of ocean water. When my dad’s family heard the sirens and smelled the smoke in 1966, they drove the few minutes it took to watch the Baths get devoured in flames never to be resurrected.

Anyway we hike out past indian paintbrush and giant ships hauling ass towards the bridge. Reminds me of when I took a cruise ship to Alaska and we almost hit the Golden Gate Bridge on our way out of the Bay because someone calculated the tides wrong and the water level was too high to pass. Everyone toasting champagne in the hot tubs on deck stopped to utter the collective murmur, why did we stop? What’s going on? 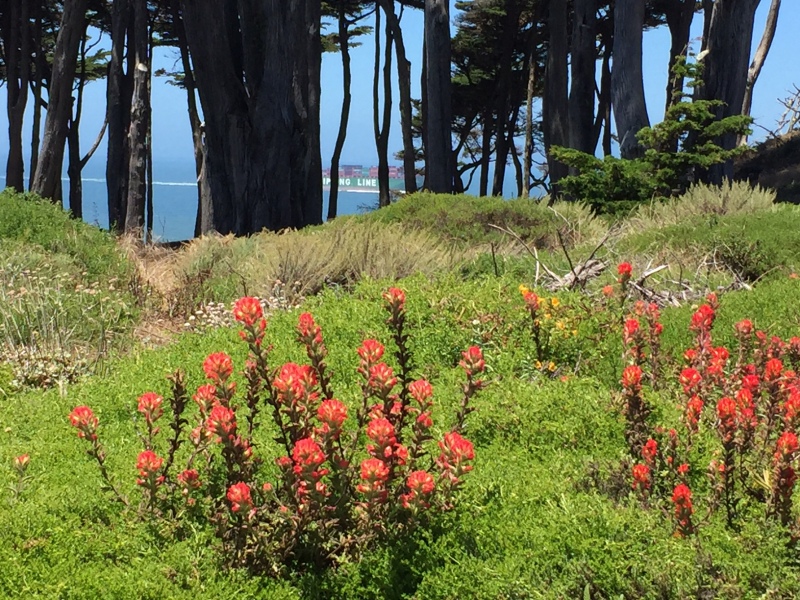 Anyway we hike out to our pot of gold, the rock labyrinth, and try to picnic there but Blue Streak says the vibe is too strong. Besides a dude is doing some rave improv dancing (without music, just wind) while his buddy impersonates one of those videocamera movers with his arms slow-flowing an expensive looking machine. So the labyrinth is busy at the moment anyway. 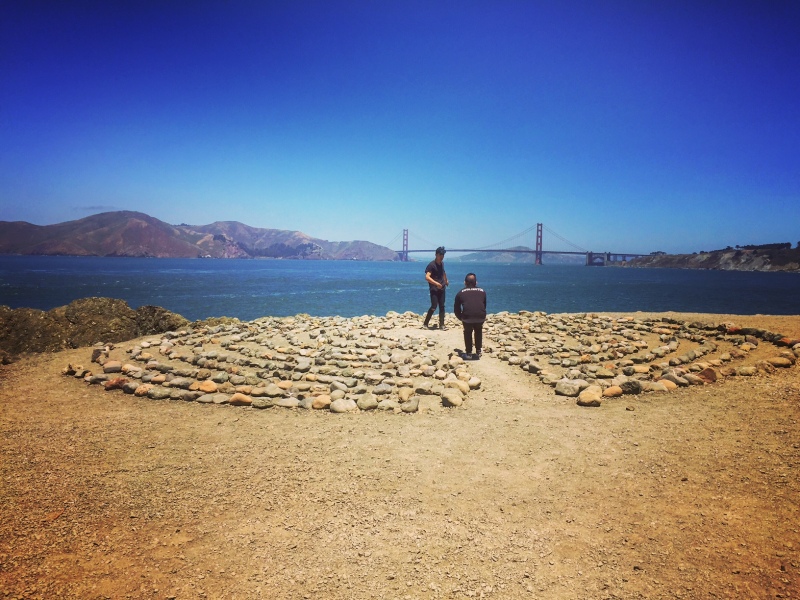 We slide down a blonde trail to the beach below. Maybe fifty? More? Stacks of rocks stand up strong across the beach. More art. Created, changed, grown, and eventually destroyed outside. Special in a different way than in a museum. Unique as the hands that stacked them. Perishable like good food.

We try to picnic there too but the smell of creosote from the giant washed up pilings is too much. So we play seesaw on one and settle on the sand, tearing into the basket of organic strawberries I snatched from the side of the field on Highway 1 and other mainland delectables before I find the spring. Not twenty feet from the waves, fresh water is running out of the earth with a big ol patch of watercress growing in it. This makes me very happy and I stuff some in a bag to take home. I want to show it off like people do with fish skeletons or wild boar horns lining the backroads in Hawaii. You can always tell if a family are land or sea people, my Hawaiian friend once explained. Look at how they decorate their fence. 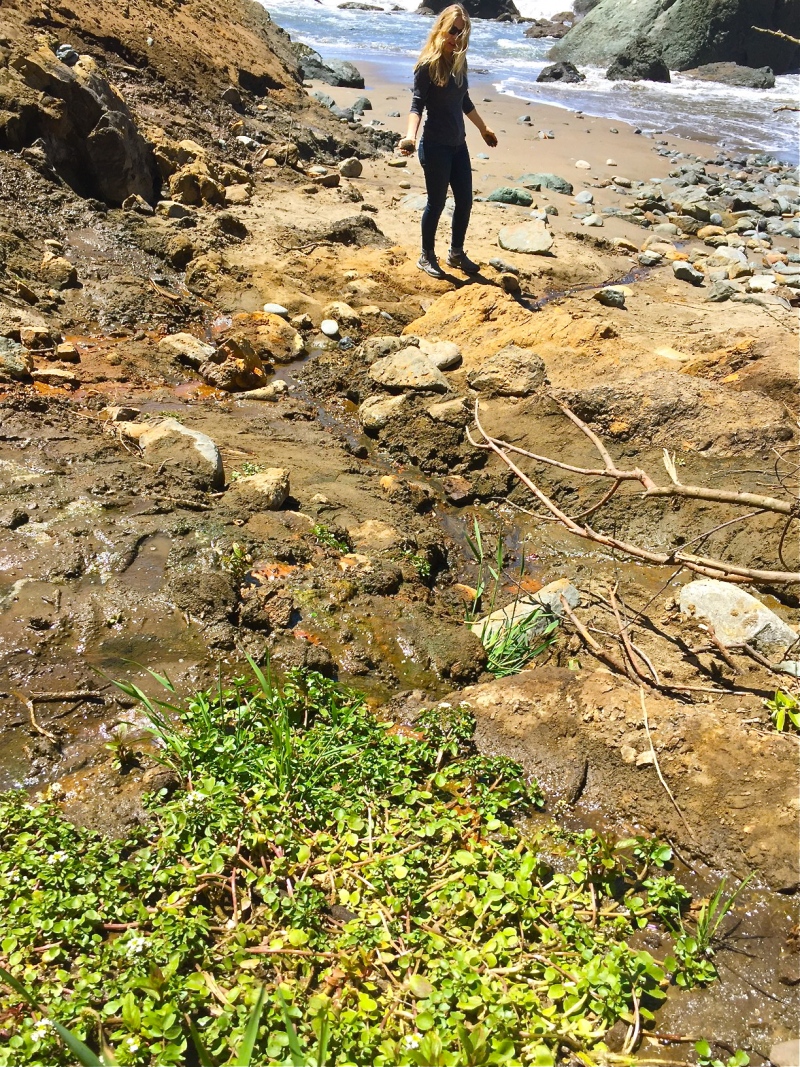 So we tried to take the electric Frisco bus Muny but got stuck underground. A short man crept over to the corner of the train and later we checked, yep there was a wet spot on the floor. A homeless man played with his foam toys, narrating a loud broken story and a girl put on sunglasses (we were in a dark tunnel) pretending to read but couldn’t keep the grin off her face nor could she turn a single page. Just before we descended into a halt: 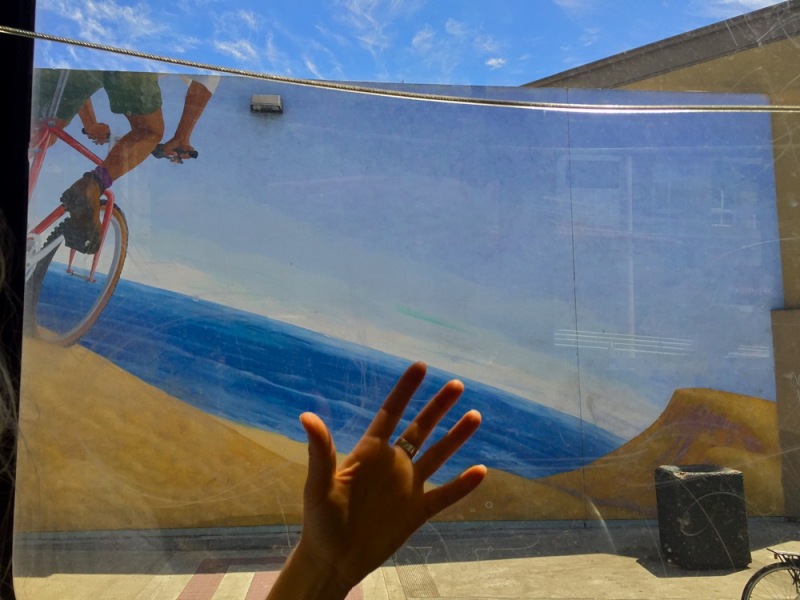 Here’s the Jesuit school that non-denoms can also attend, spiderwebbed by Muny lines. Life is art. 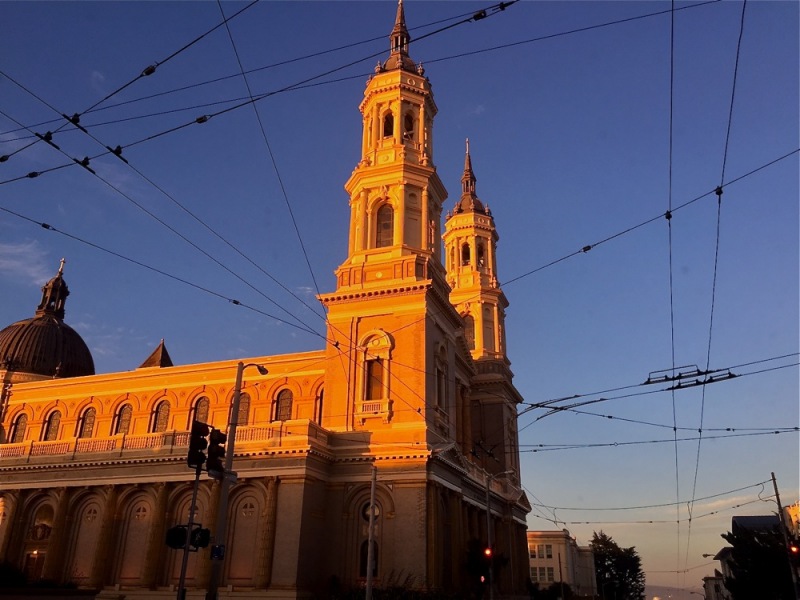 Across the Bay is the Italian Street Painting Festival at the base of the Mission built by conquering Spaniards in San Rafael and preserved by astronomical property taxes. The festival was free when I was little. I have a hankering to inspect the art (some is that really cool depth-altering psychedelic stuff that transforms asphalt into 3-D) at night when the ticket police are gone. But the moon’s not full so eh. Maybe next year. 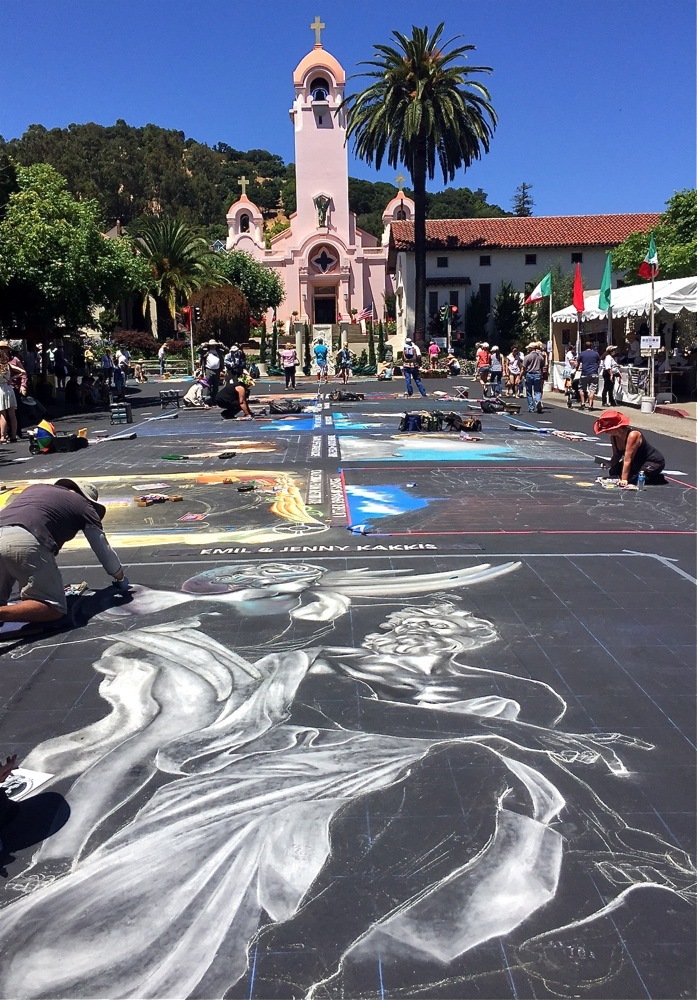 Learning to Fly in Colombia: Paragliding