If you haven’t been to Stout Grove off Highway 199, you’re missing out on gargantuan redwood trees, some with hollowed out fairy nooks and a ferny understory with magical light shafts cutting through it all. No big. But what I didn’t realize is that this (free!) wonderland is also one of the gateways to the Smith River, in all of it’s Caribbean-esque glory. 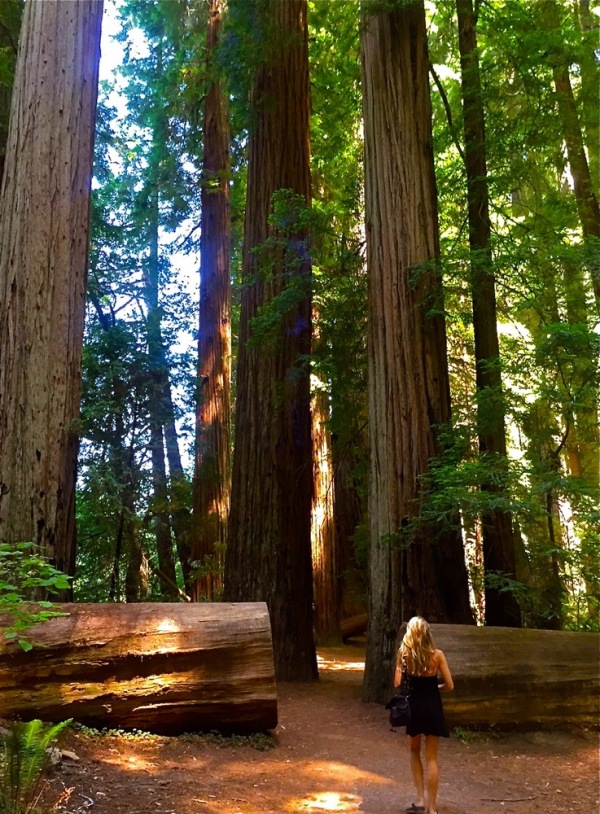 Take the “summer only” trail to the river. There’s a footbridge to the other side, away from the flocks of squirts that stir up the water and pee in it and stuff. Which I never do of course.

The other side is less crowded and full of sun baked rocks. The Smith River is super clear and has big boulders that stick out of the water so you can sun yourself like a lizard, and submerged boulders that you can swim through. With fuzzy underwater eyes, it looked like swimming around coral heads in the ocean. 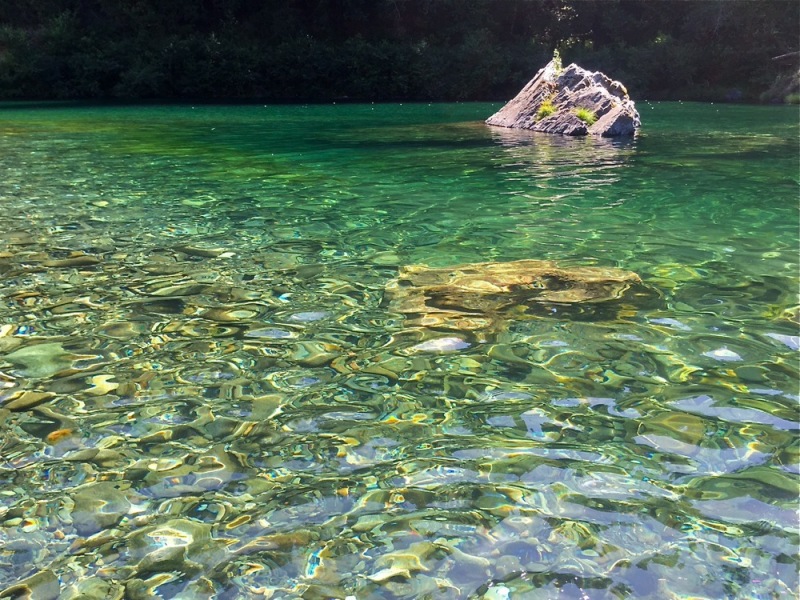 There are plenty of other spots in dip in the Smith, like this one on the side of Highway 199 right at “Hardscrabble Creek.” 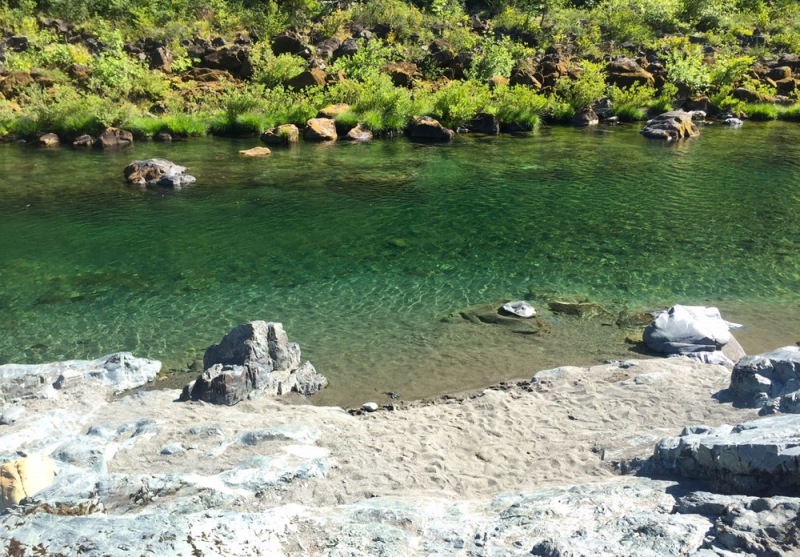 But the Stout Grove river spot is to me the most spectacular. My WPM ratio was off the chain all afternoon. (Wows per minute)

A little further south, not far from the town of Mt. Shasta is the glacial and gorgeous Castle Lake. Clear water, granite cliffs, and a raft in the center to swim out to, with a view of Mt Shasta. There’s a research station here, and a whiteboard at the trailhead will give you up to date temperature info on the water. The day we were there the surface water was about 74 degrees, and locals said it had cooled down a bit. I thought that wasn’t bad. (Joke’s on me.) You can hike along the lake just a little ways or maybe a mile or two, zeroing in on your perfect mini-sand beach or boulder diving launch. We chose the sand, about a quarter of the way around the lake. Which is where I had the bright idea to swim out to the raft in the middle of the lake. I kind of forgot that we were at whatever thousands of feet, looking up at a snow covered peak, and that water gets damn cold as you get away from shore. Plus, the raft looks close from the sand. It ain’t.

But the electric blue dragonflies making sweet love were pretty cool. Video pans out to the lake.

There is a campsite 1/4 mile from Castle Lake, and it’s free. (Free!) But there are only 6 sites, first come first serve so settle in early. If it’s full, head back downhill and on your right is a dirt road with lots of little pullouts, bushes and fire rings. It’s clearly the campground overflow, with nice view of Mt. Shasta.

Just south of Mt. Shasta on I-5 is Dunsmir, home of Mossbrae Falls. The directions are a little lengthy, so google it. I will say that it involves walking over a river, then along the railroad tracks and darting off to the side when you hear the train coming. There’s not always a lot of shoulder, so this is the adventure part. If you’re a pussy don’t try this spot.

I happen to be super fond of trains, and blackberries, so I was very very happy. I’ve never seen so many uniformly ripe blackberries as along this stretch of railroad track. Then you duck through the cedar trees and find this. 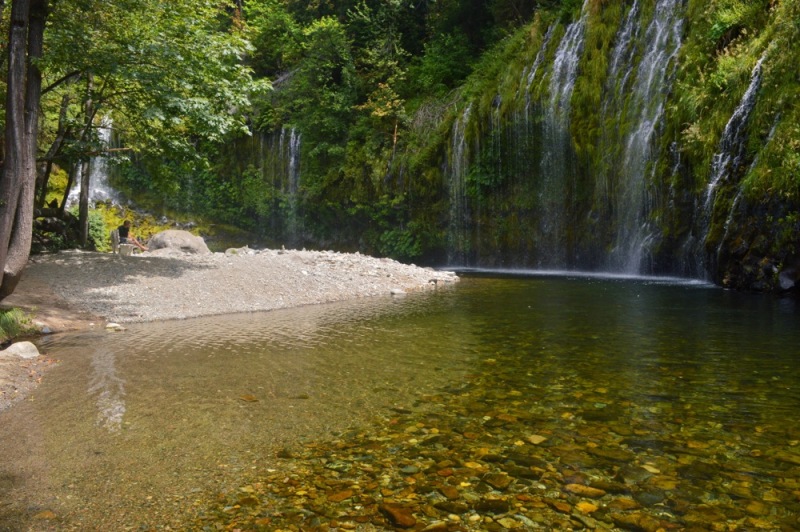 The waterfalls are a semi-circle of falling water. Ah, California. They are spring fed right out of the top of the cliffs, and fall into the Klamath River. Unless you’re a polar bear, you probably don’t want to swim in the icy liquid of the Klamath, but it’s a fine spot for everything else. We puffed, picnicked and watched the Southern Pacifics roar by on the trestle just upstream. Video pans over to the falls. 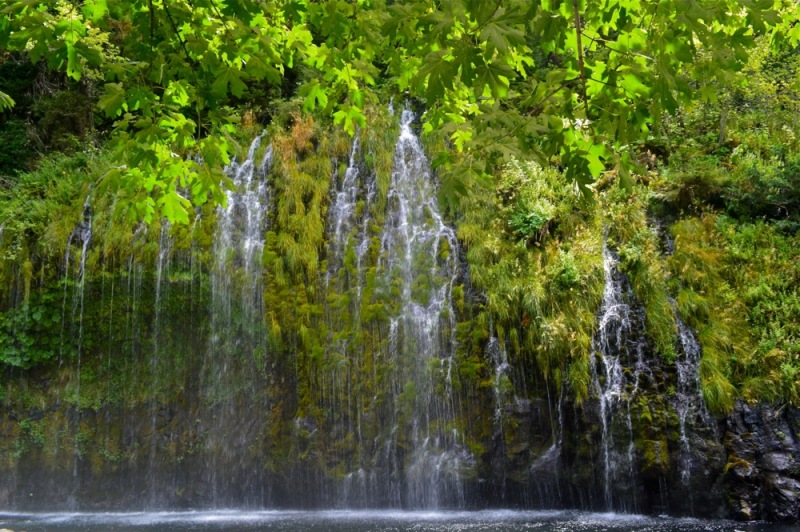