The Pig Trail Scenic Byway dumps us into the mountains at night. I roll the windows down and turn the music off because the decibels coming out of the roadside greenery are drowning it out anyway. The headlights catch– an armadillo?? crossing the road. We drive under the dripping canopy to a campground called Redding, where we find every campsite empty. But every creature that can chirp, croak, squeak, flutter or buzz is going at it at full volume. As soon as I don my headlamp, flying creatures try to enter my eyeballs, my ears, my mouth. This is what I always thought the Amazon feels like.

There are signs saying that this area is a flood zone and to beware. The sheets are to hot to lay on. The whole forest (jungle?) is sweating. I can see reflecting eyes in the bushes and I fully expect a snake to slither in through the window while I sleep. This forest is just not like the West, it is wildly, loudly, ALIVE.

But when I wake up, I walk down to the Mulberry River. Yay! The swampy drippy dank quasi romantic backwater I’ve been craving. I’m not brave enough to swim, just to stare. 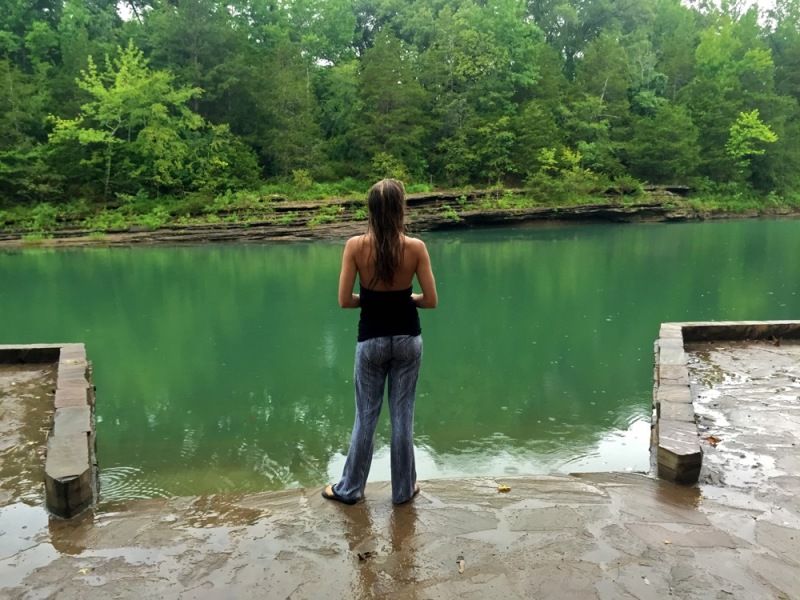 In the morning I swerve to a stop at a orange spray painted rock that says “Swingin’ Bridge” just outside of the teeny tiny town of Oark. I don’t know why I stopped. I’ve never seen this is in a brochure and I’m not sure what they’d even say about it. And the water isn’t radioactive, it’s just that blue. When you step onto the swinging bridge, it creaks, it sways, it’s just a place I’d go to drink beer at sunset. It’s a teenager’s place. A thinker’s place. To simply hang. Which is part of the reason I’m here exploring. To see the things that aren’t advertised and amped up, the treasures whose gold is just to be there. 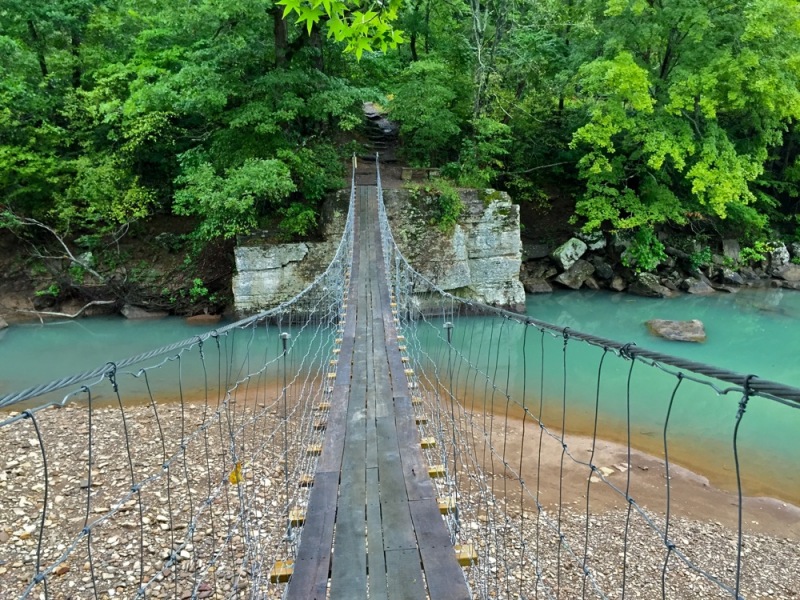 So let’s just get it out there. I’m a river slut. I’ll do anything for that perfect river and I’m always searching. My new favorite is the Buffalo River. 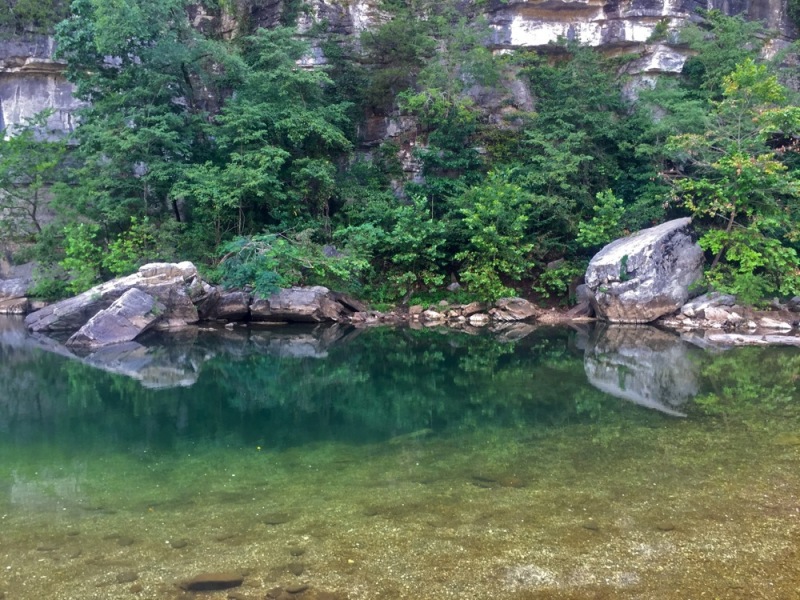 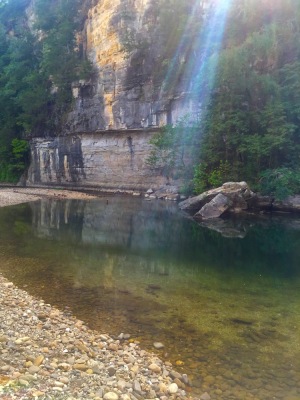 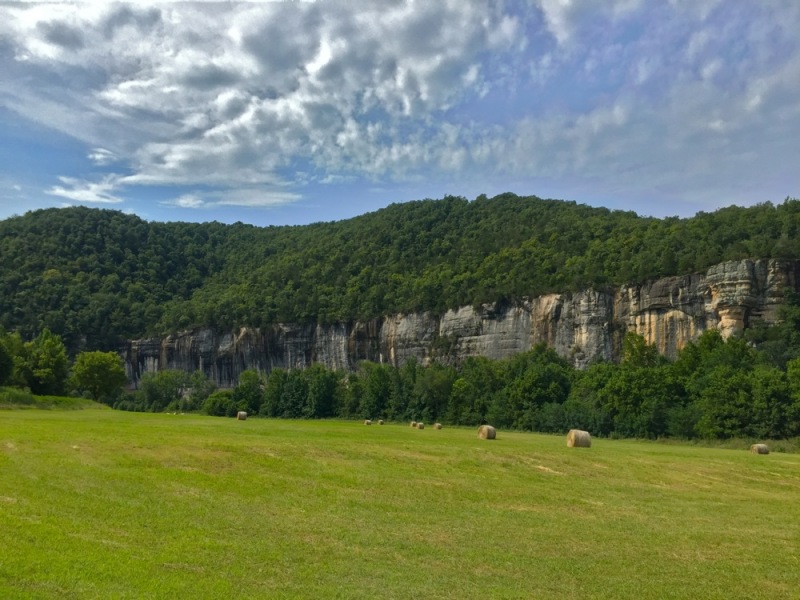 You can float it, fish it, canoe it, or just swim. It has the highest bluffs in the Ozarks, boulders for jumping and it’s not cold it’s just…perfect. It’s clear to the bottom, and you can find milky quartz on the pebbly shores. Oh and this area is full of butterflies. 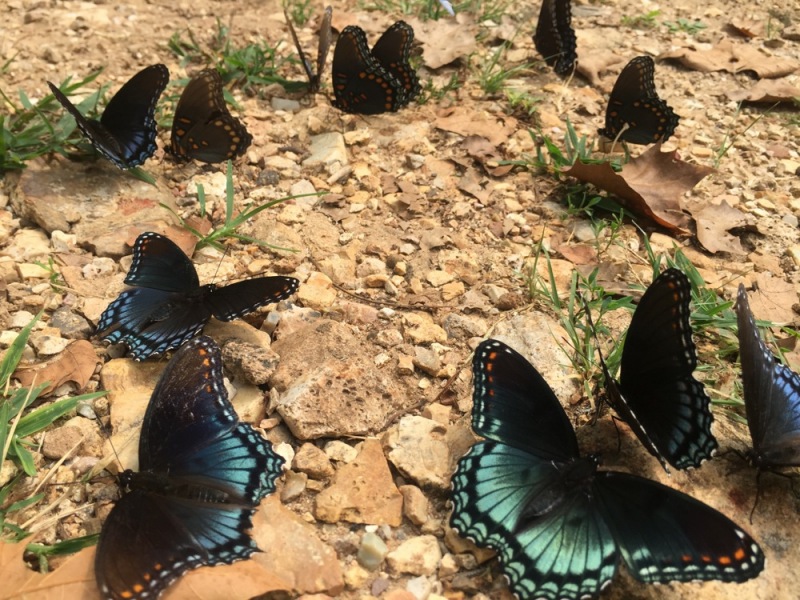 We pull over for ice. We walk into not a convenience store, but a restaurant called Low Gap Cafe. Do you wanna eat? Asks a smiling guy in a tie dye t-shirt. Uh okay. I order the pasta primavera, he orders a monte christo, I think nothing of it. But a little framed article on the wall says the guy that owns this place is some fancy pants chef and I can’t really believe it because we are in the boooNIES. Nowhere near cosmopolitan. I glance at the chalkboard specials menu. Hmmm.

The pasta is perfect. The monte cristo is juicy ham and turkey and swiss on butter fried bread with powdered sugar dipped in raspberry preserves and then lunch is over for less than $18 and we’re like….whaa? 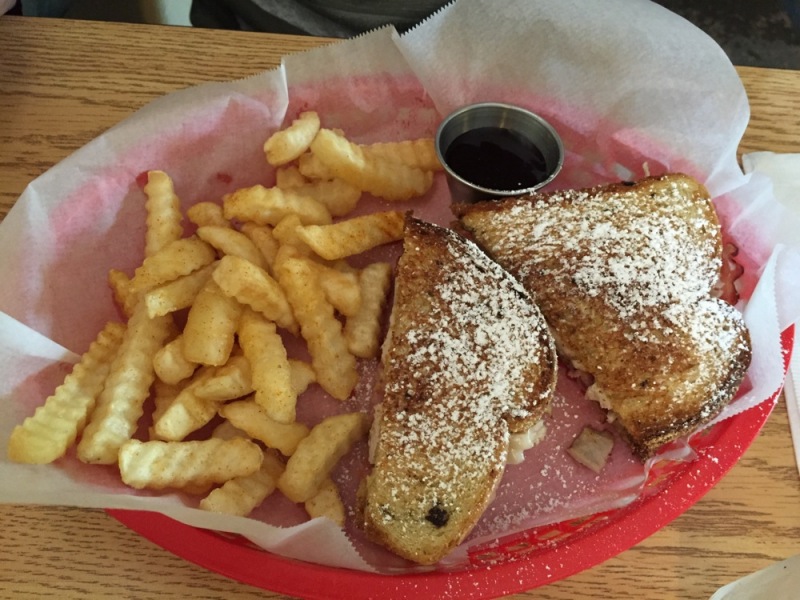 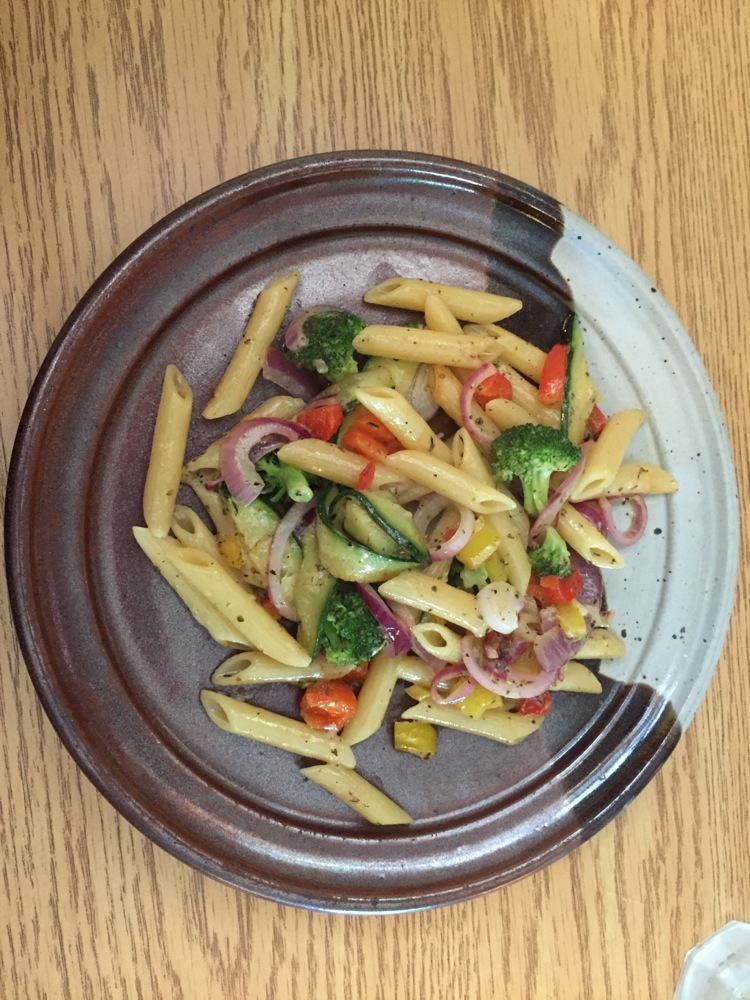 They have live music every Friday and Saturday out on the porch. And yes, I did go back for the frog legs and I now know there’s a reason I don’t eat deep fried frog. It’s gross. 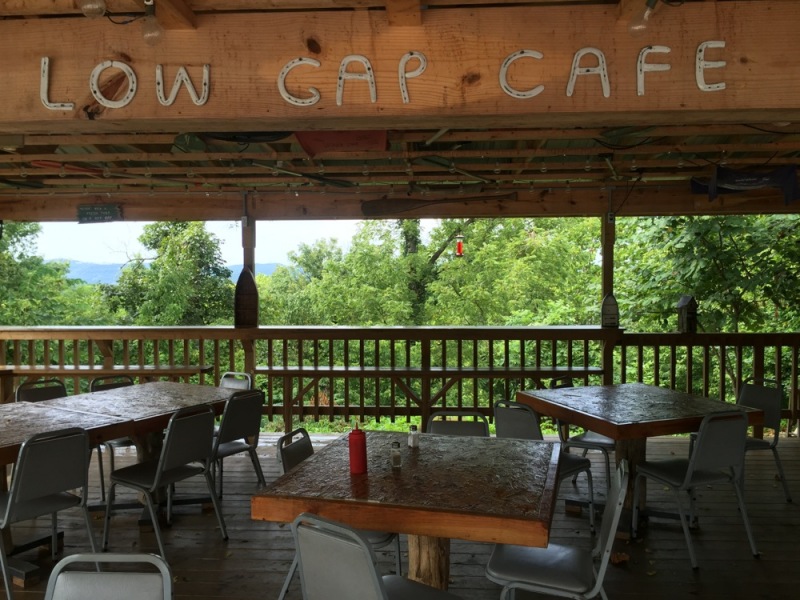 This is the first day I see the Ozarks at sunset. Blue ridges as far as I can see and white fog or mist sticking to the valleys. It gives me shivers. The good kind.

The Low Gap Cafe is smack in the middle of Newton County, my favorite county in the Ozarks. Newton is home to Hawksbill Craig, the hike to the quintessential boulder jutting out over laps and laps of green valleys you see in Ozarks advertisements. If you’ve seen such a thing. There’s also Hemmed in Hollow, the tallest waterfall between the Apps and Rockies at 225 feet, and other outdoor fun stuff like the natural rock bridge of Alum Cove, Pedestal Rocks, Marble Falls, Lost Valley and several caves. But beware folks, this is a dry county. To get an idea of what that means, check out this foot stomping tune by Arkansas native Mountain Sprout and soak up the culture.

TC (trusty companion) noticed that all the houses on these meandering mountains roads are free of clutter…and abandoned cars…they’re just clean. Unlike Virginia, North Carolina and pretty much the rest of the south. Two rocking chairs and a stack of firewood are the dominant decoration here. Could the simple, clean vibe be due to the lack of cheap shit to buy from Walmart? It seems that Walmart does not shit in it’s own backyard. The Ozarks is only 2 hours from the original Wallyworld in Bentonville, Arkansas, but it’s a world away and it shows.

We make our way east to Blanchard Springs to see it’s CCC built dam/lake, caverns, spring and waterfall. Did I mention there’s a lot of water in the Ozarks?? 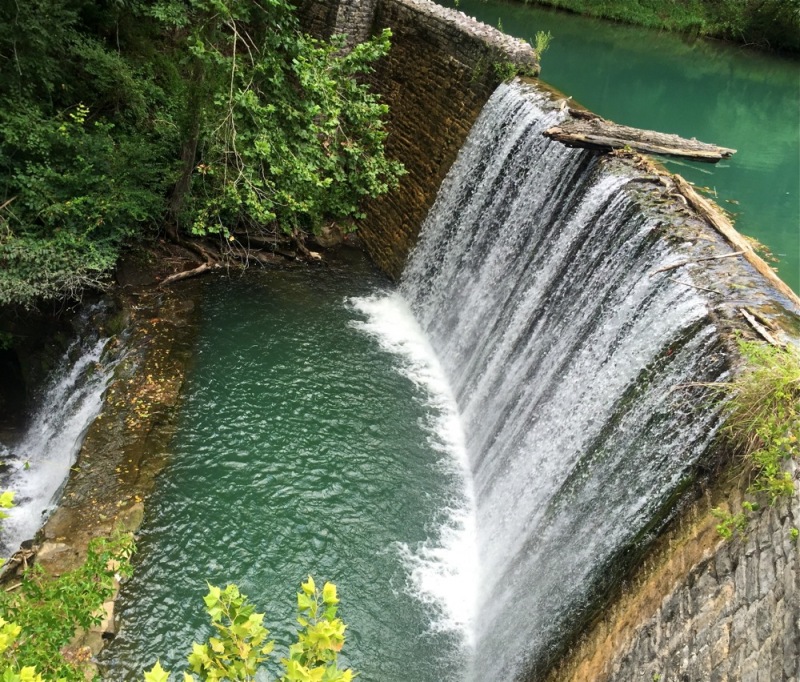 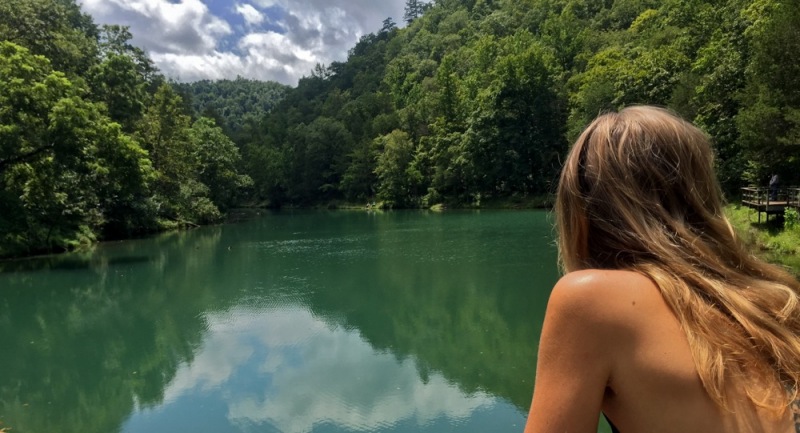 For $10 we take a cave tour down to Blanchard Caves and into the most magical underworld I’ve ever seen– stalactites and mites backlit by multicolored lights with room after room of crazy formations. You have to take an elevator down to the caves, enter an airlock, and not touch anything. Note the staircase on the left for scale. 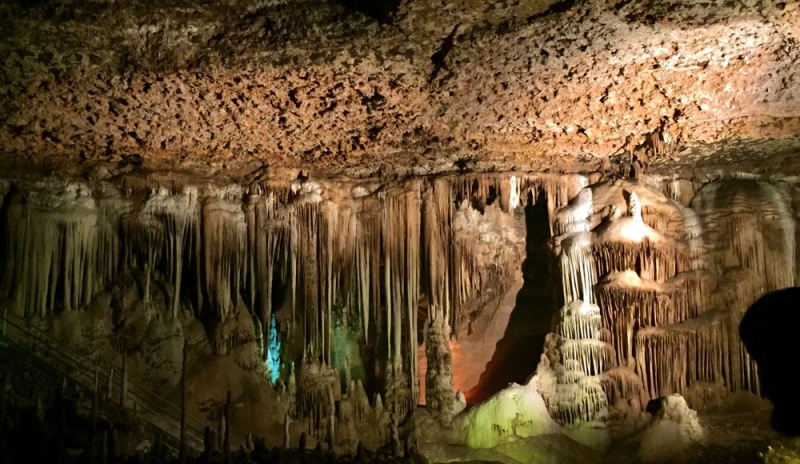 This river carved the caverns and exits inner earth at the precise temperature of fucking cold.

I was sad to leave. I’d like to come back, rent a cabin, (adorable mountain cabins aplenty) canoe the Buffalo, eat in Newton’s quirky county seat of Jasper, and visit all the OTHER waterfalls I didn’t make it to. 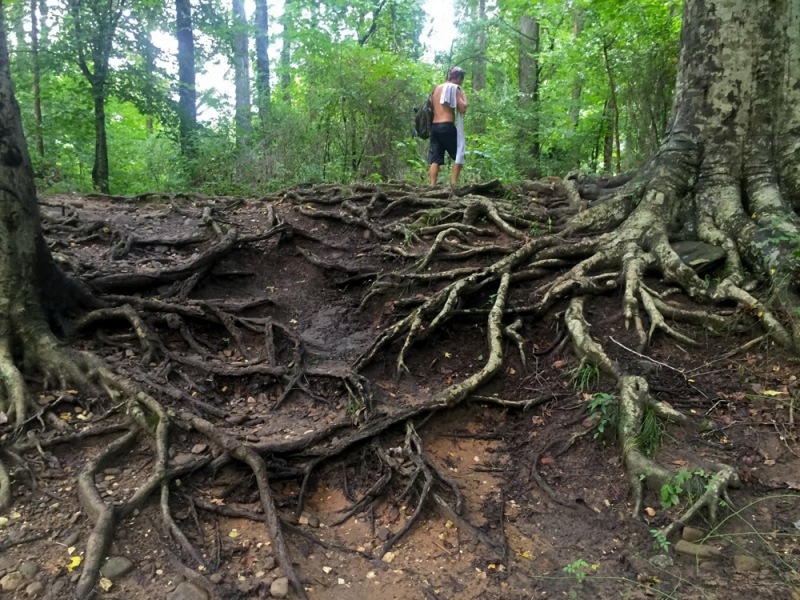 I’ll leave you with some typical Zarks scenes. 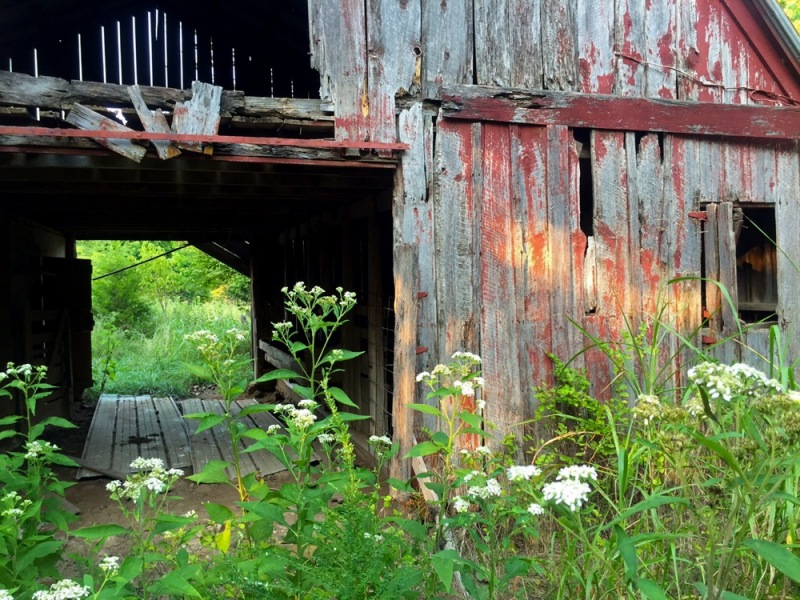 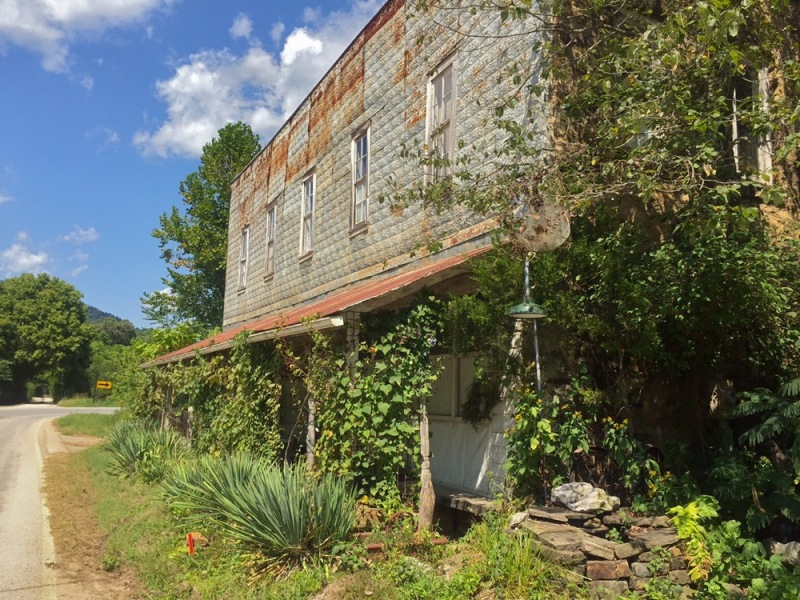 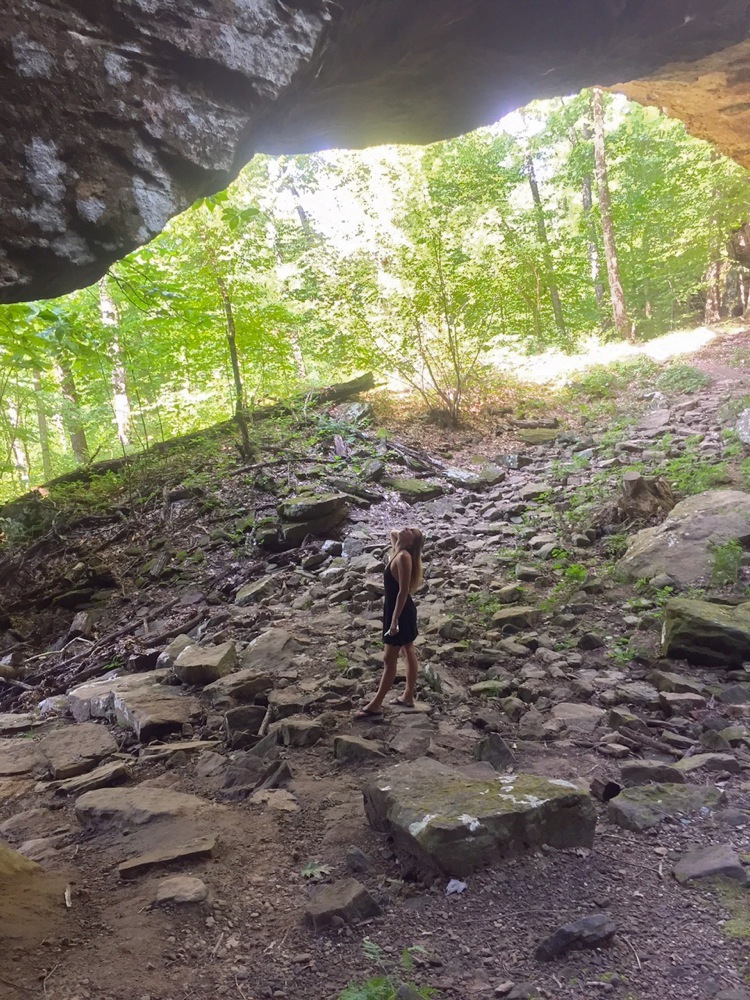 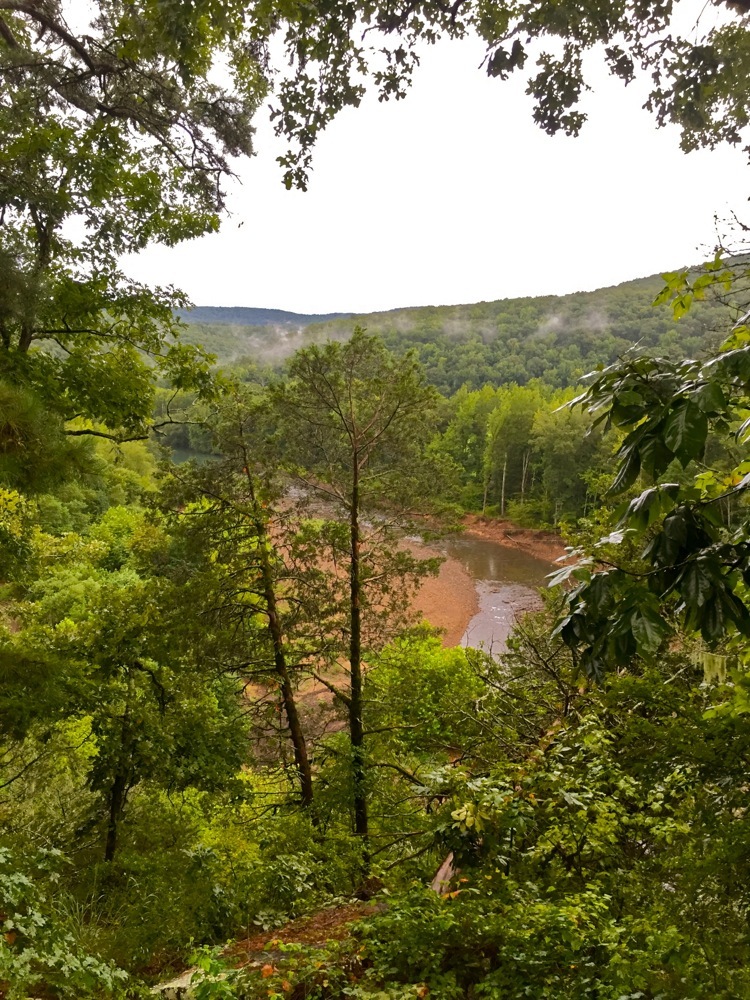 Out of Luck In Kansas

Why I Really Need to Like Arkansas (aka Traveling Utah &