It’s all Ivy’s fault. I get dumped by Mr. Tall Dark and Handsome himself and feel like I’ve fallen off a skyscraper. I need to get out of Maui, like fast. So on December 7, 2013 (the day my Saturn return starts) I find myself in a dingy brown wing of the Miami International Airport meeting up with… the Public Defenders of Los Angeles. What the hell am I doing traveling straight from Miami to Havana with a bunch of lawyers?

Why am I not in line in a Mexican airport with a hundred dollar bill tucked in my passport, sweating and wide eyed in the customs line? (This is 2014 mind you, and meanwhile things have begun to start to sorta loosen up)

Well thanks to Fabiola Oritz and CTS Travel that organizes approved trips to Cuba from the US, I am on the “Art Tour.” After some paperwork, I am stamped sealed and approved.

We step off the plane onto the hot asphalt. Inside the terminal (no A/C) is one old screen mounted in the corner, displaying not twenty flights, or ten, but…three. One of them mine. The rest of the screen is blank and flickering.

We drive into a leafy neighborhood, to the home of one of Cuba’s well known artists. He finds old things and paints on them, like petrol signs from old gas stations. Making political statements in whispers. His father was Fidel’s personal photographer. He takes out old boxes full of black and white photos of the aging dictator, catching faces of Castro I’d never seen.

When you can’t easily buy canvas, or go online to order paintbrushes, things get… creative. The art in this country blows me away. Unlike most of the world, in Cuba only artists and athletes make serious money. What about doctors and lawyers? They have second jobs, or open bakeries in their basements. These are not glamorous professions. But to be an artist… this is how you can lift yourself out of Cuba and float on the wings of foreign currency. This is the dream. 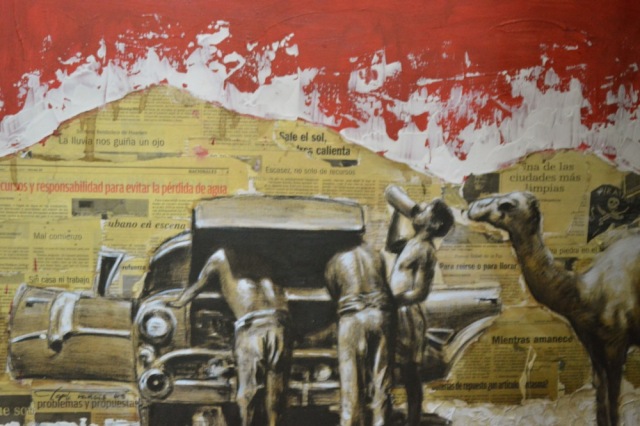 In Havana Vieja, I walk. And walk. Into little galleries and big ones, hole in the wall shops down cobbled alleys, and apartments-cum-studios. Past old churches with doves cooing in cement ledges, past sculptures and tumbling bougainvillea. 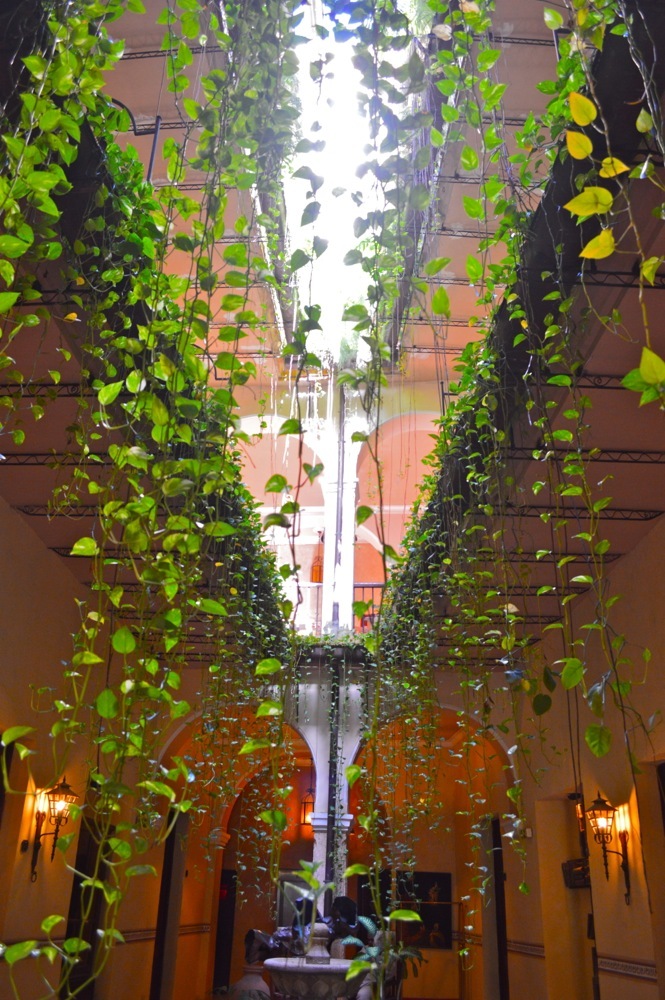 And while I’m walking, I meet… Aurelio. We’ll call him Aurelio. I wouldn’t want to get him in more trouble than he already does. He shows me this little shop and that one, the artist cooperative at the end of the alley full of more prints and oil paintings than a New York art school. We’re talking and laughing- me practicing my Spanish, him his English, when he stops dead in his tracks and his eyes go wide. 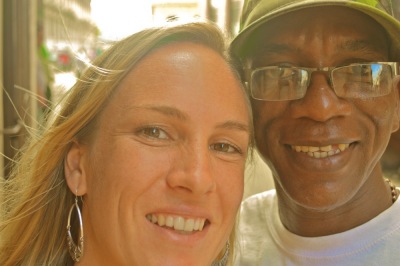 But I didn’t have to wonder very long. Two brown uniformed officers step out of the shadows and take his arm. What’s happening, what the hell is going on? I’m thinking. They’re talking low and gesturing at Aurelio. They ask for his papers, that part I can tell. Aurelio fishes them out of his pocket and then voices get louder, faster, and I can’t understand anymore. I sit down on the curb. I wait. Finally I go up to the officers and say, “esta bien, Aurelio es mi amigo, todo bien senores.”

They turn their backs to me and keep talking. Wow, okay. I watch from the street in silence, my stomach sinking. I don’t know what I’ve done to this poor guy, this man that hasn’t asked for money, who is showing me Havana, taking me to Hemingway’s watering hole and buying me sweet spiral peeled oranges from street vendors. 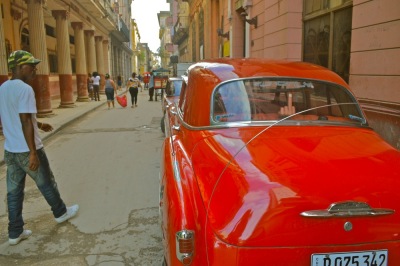 Ten minutes passes. Twenty. It’s starting to get darker. And finally, the officers let him go. I run over to Aurelio, who looks visibly paler.

“What happened?” I ask, looking up at this sweet man, this kindergarden teacher, this new friend.

“I not should talk to you,” he says, bowing his head.

“What was the problem?”

“There many problem,” he says, looking down the busy street.

“We can’t talk to Americanos,” he pauses. “And they looked up my papers.”

“Three years ago I do something. I try to leave Cuba. On a raft I build with my friend. We get out to sea and get blown back. We get caught.”

I stare at him. This is beginning to feel like a documentary on Netflix.

“And this not the first time,” he says, looking down at the street.

There is a girl in a wedding dress walking between a gaggle of friends, laughing. Someone calling out about fresh fruit.

“Vamos,” he says suddenly and starts down the street. I jump up and follow him. 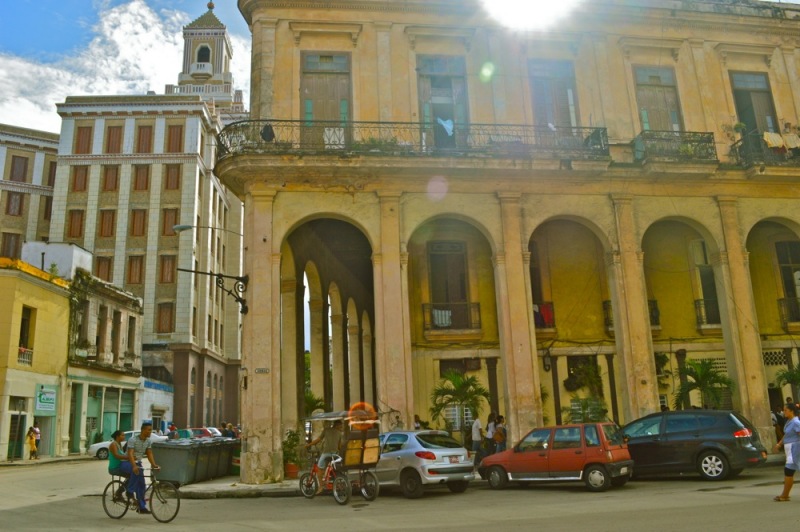 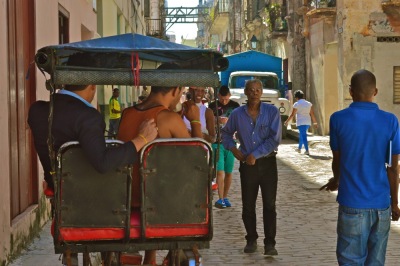 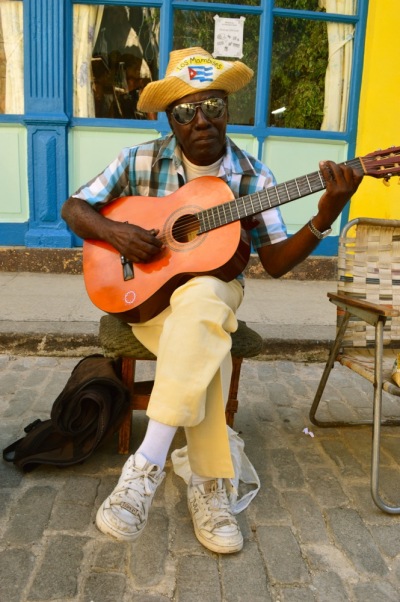 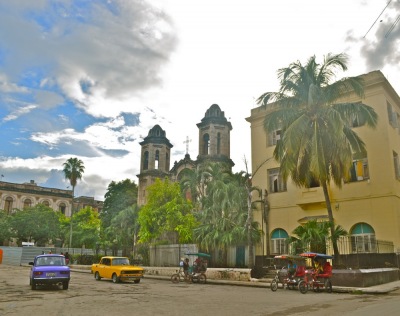 Aurelio keeps talking like nothing happened. He takes me into a plain shop with mostly bare shelves, and old Soviet cash register. Two men light up in smiles behind the counter. Something to do! I think.

“This is ration shop,” he explains, and shows me his little paper booklet of rations.

Sugar, flour, rice, coffee, salt. Half a pound of this per person per month. Two pounds of that. This is where you get your food. If you want fresh fruit or vegetables, you have to buy them out of your salary. Which is very close to nothing. 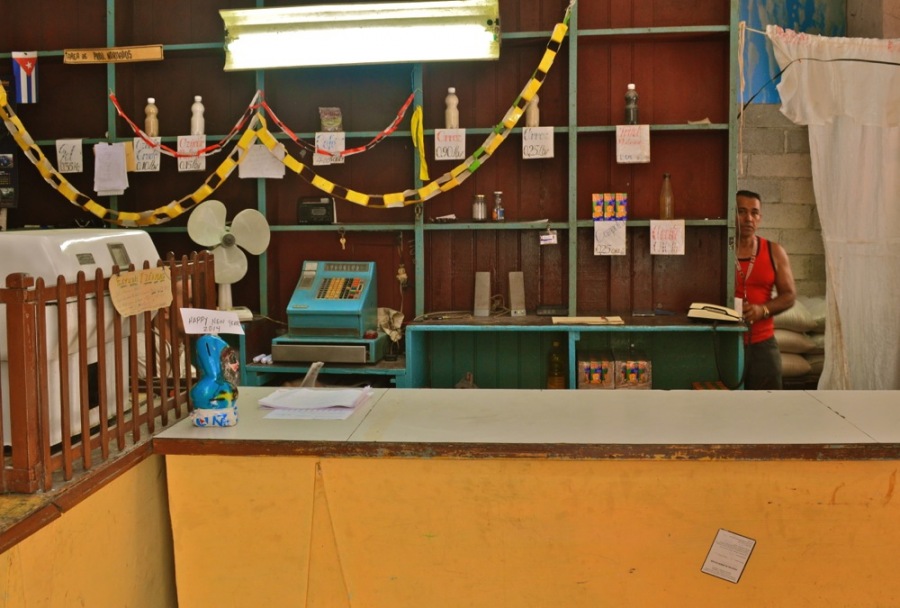 I bid farewell to Aurelio into the back of a shiny 50’s Chevy backseat with five other men. Back at the Melia Cohiba, I try to get in some internet time in the lobby. I strike up a conversation with a Cuban man sitting on the couch with me, the Special Couch which is the closest spot to the Special Router behind the concierge desk, which sometimes works– when the time is right. And the stars are aligned. And the smoke curls away from Miami. He tells me that this and the other nice hotel are the only places in Havana where you can get internet. I am stunned. And, he says, it costs a month’s salary for an hour of internet time.

The Melia Cohiba meets the neighborhood.

I look at him, stunned.

“Si, si.” he says. And explains that IF you can get to the hotel, and IF you can afford to blow a month’s salary, and IF you can get on the network, it is very slow. And lots of things are blocked. He is currently downloading his emails so he can read them offline. He tells me about the “newspapers” and “magazines” in Cuba.

“Todo Castro y Fidel,” he says. Nothing else. No current news, events, sports, international gossip, nothing. Just a dead guy and a dying one, day after day.

One week is not enough. I have to go back to Cuba.

Cool Stuff To Do In Southern Oregon

The Funky and the Bizarre: Hot Springs and Eureka Springs, Arkansas