We run out of money somewhere in West Virginia. Since then, we’ve been “free camping.” On BLM land, in Wilderness Management Areas where we are the only ones without a pickup, confederate flag and a rifle 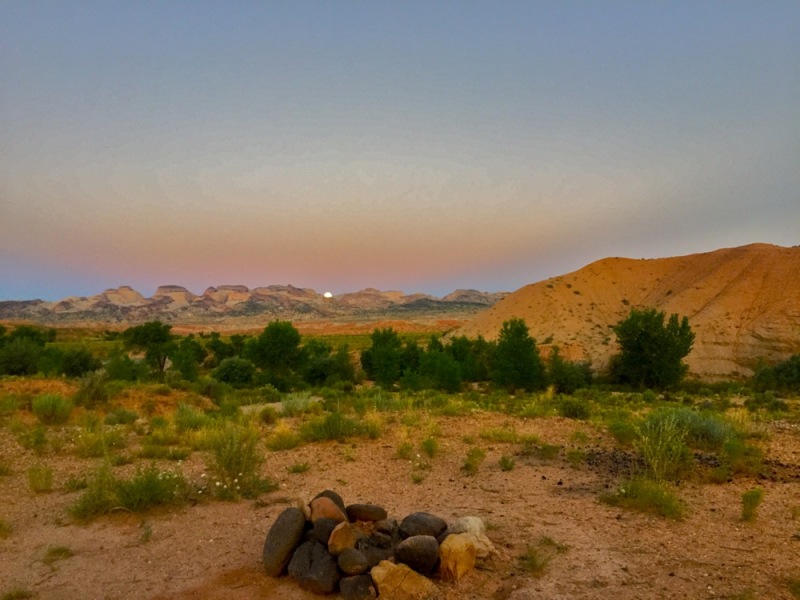 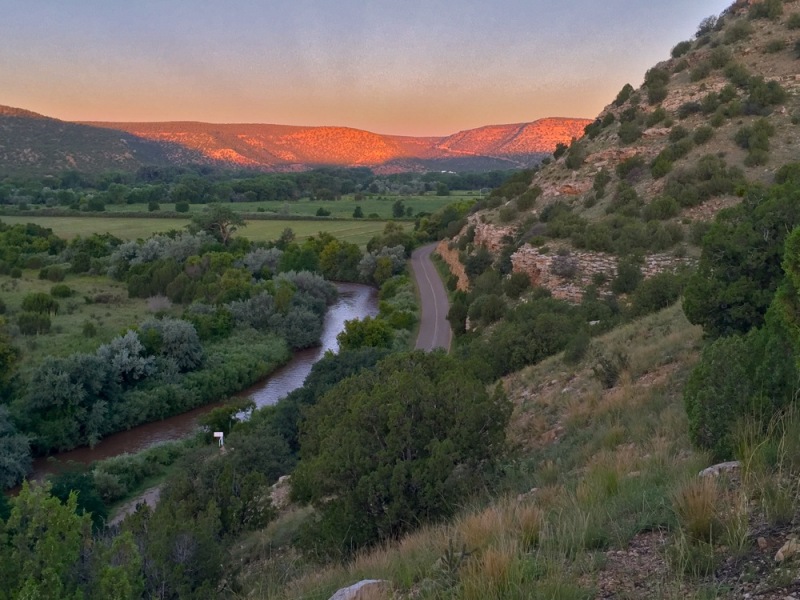 and now at a casino. Or so we think. There’s nowhere to camp in Kansas, much less for free. Which is why we’re here. We exit the toll road we tried frantically to avoid (digging through the glove box for change and holding up a line of cars) and pass a lone buffalo tearing at the manicured grass behind the giant Downstream Casino sign. It’s a Friday night and the evening feels kind of exciting in spite of the bland white sky that’s darkening. People with stringy hair and dirty jean jackets stream past our parked car. Semi trucks roar in and out. The casino is tall, flashy, and packed. We know we can walk in there and get a first time gambler card with money on it. We know we can go park in the “RV park,” which is just an empty parking lot behind this full one, with yellow floodlights and a highway soundtrack. No grass, no privacy. I wonder where I’ll pee in the middle of the night.

My Trusty Companion is staring at his phone, and then the neon casino entrance, and back at the phone. I can see the gears turning.

“Well, there’s another casino that’s smaller, about 40 miles from here. It looks like they have grass. And it’s next to a train track,” TC says.

“I love trains!” This makes me happy. 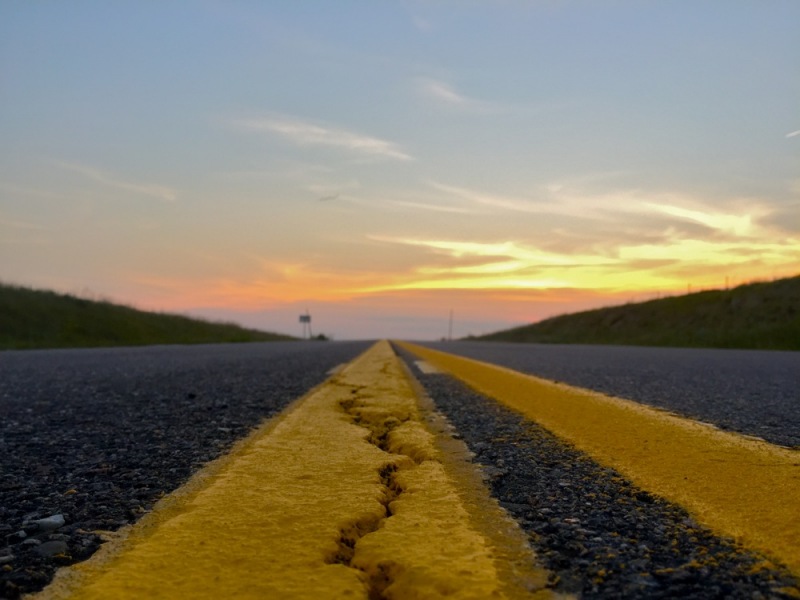 We drive a narrow ribbon between cornfields. Then sorghum fields. It starts to get dark and I know the full moon will be rising somewhere. This country doesn’t grow food, I knew in a vague way before this trip. Now it’s obvious. This country grows only three things en masse: animal feed, oil crops and field corn.

The phone navigates us to a gas station in the middle of more cornfields, and we drive around it once before realizing Siri’s taking us in a circle.

“What the hell?” He says, and brakes to a stop.

And then I point.

It’s almost worse than if it wasn’t there at all. A one story prefab building that looks like a welfare office sits alone in the dying light. One small sign. No neon, no flashing lights, no truckers. A man or a robot on a golf cart winds slowly around the perimeter of the parking lot. I can make out a train whistle somewhere far away, and the tracks angling off into the horizon, the forever flat. We stare at the RV park in silence, which does in fact have a strip of grass. Thick clouds of flying things jerk and swoop in front of the floodlights.

“I’d rather drive all night then stay here,” he finally manages.

I sigh. I’m hungry. This feels like the scene of a horror movie, but it’s so awful it’s kind of fun. Or at least funny.

“Alright. Fine. Let me just go inside and pee.”

He sits back and sighs.

In front of the automatic door is a gaggle of folded up wheelchairs. I step onto plush carpeting and there’s every ping ding boing blululup and ta-da sounds I’ve ever heard, all mashed up at once. Reservation guys in matching blue shirts make waves when they move through the smoky-white air. I know the noises are slowing down now and people are staring at me. I note all the burning cigarettes stalled halfway to mouthes. Ping. Pause. Da da da DA! And then silence.

We’re driving again. The moon is so big behind us that the car makes a long shadow on the road. Our tires make techno sounds as we flutter over parts of the road you normally wouldn’t, urged by a endless streak of orange cones. It’s 10pm now. He gets grumpy if we don’t know where we’re gonna stay by dinnertime.

We pass a whole street of abandoned buildings, some with No Trespassing signs and some that didn’t bother. There are strange piles of sand on one side of road. On the other, the corn.

We don’t know what to do. We head in the direction of Wichita, me sucking a Reese’s chocolate and TC staring straight ahead.

“I have a bad feeling,” he says and I slump in my seat. Because they’re always right.

At midnight, I find something on a cycling website that says you can stay at Kansas State Fishing Lakes for free. We’ve passed a few of them already and I hope there’s another one. I wonder if we have to be on a bike. I’m deciding that I don’t care either way when I hear the siren.

The speed limit is 85 and we’re making good time towards somewhere, anywhere but here. It takes a minute to back off of hyper speed and find a place to pull over. I look at the center counsel, where I left my giant kitchen knife from a previous avocado massacre, the blade glinting in the moonlight. I wonder if it smells like hash oil in here because I can’t tell anymore. I think of all the things we have that I’d rather we didn’t right now.

TC’s face is blocking the officer’s chest, where a vest says POLICE is white block letters that are bigger than they need to be. All I see is a crew cut, buck teeth and acne scars. I’m wearing my black dress, legs on the dashboard. I don’t want to move much or look suspicious. So my legs stay.

“I pulled ya over cause your headlight’s out,” he says, leaning on the car. I let out the breath I didn’t know I was holding.

That part’s easy. Now TC is trying to get the insurance information to pull up on his phone but the Geico app demands an update first.

“Are you from here?” I ask the young kid.

“What about the fishing lakes, how are those?”

“Oh, not so clear y’know. But my favorite is up north…”

He eyes my legs and then back to his flashlight. He can’t seem to get it to work. Which is just fine because he can’t see the knife in the dark next to me.

“Okay here’s our insurance,” TC sighs and shows him the phone without letting the kid actually touch it. He can’t be older than 23.

We talk about the fishing lakes some more and I tell the kid about Arkansas. Not too far from here, I say. You should really check it out.

When he backs away from the car he says, “why don’t you go to the next gas station and get that light fixed up and get a drink or sumthin? They’ll catch ya in the next town y’know.”

We look at each other. A drink?

“Yeah, definitely, we’ll do that.”

And he drives away.

TC is not laughing.

I’m not the one who has to change the headlight though. I sit on a concrete block at the gas station and look up. I’ve never seen so many insects in my life. The car is spotted with their carcasses like we went through a locust swarm. Maybe we did.

TC is moving between the manual and the headlight. Screwdrivers come out. Then cusses. This new car requires five steps for every one on a “regular car.” And I guess our broken headlight had been held in by a little piece of cardboard. Like all the other surprises from the previous owner. It’s 1 am now, and strangely, it’s loud. There are sirens wailing just out of sight. Truckers idle and another pulls in, with custom purple lighting strips and airbrush art. There’s shouting, music, the buzz of the Land of the Bugs, and the highway.

At 2:30 am, we’re driving gravel roads between thick rows of fertilizer-bright corn starting to sag with their weight. I can tell the season by the corn in every state. Next month they’ll be brown stalks that make hollow sounds in the wind.

I can’t imagine there’s anything out here, much less a body or water or a campsite.

A turtle walks across the road and disappears into a row of corn. Hmm.

And then, a sign. McPhearson fishing lake! Suddenly there are trees, tall trees. In the morning I’ll inspect them and the things they drop, which are round and yellow. I’ll call them tennis ball trees.

We pass a bathroom with a solar array on top. The panels are encaged in metal with a padlock.

I can see something shimmery in the distance. We drive further into the instant forest, with the flashing eyes of an owl sitting in a tennis ball tree staring at us.

We break out the camp chairs, the cocktails, and I make grilled peaches wrapped in bacon. I read my horoscope from a wrinkled free paper from some other state, and we eat to the sound of generators, yelling, and tires spinning. We made it. 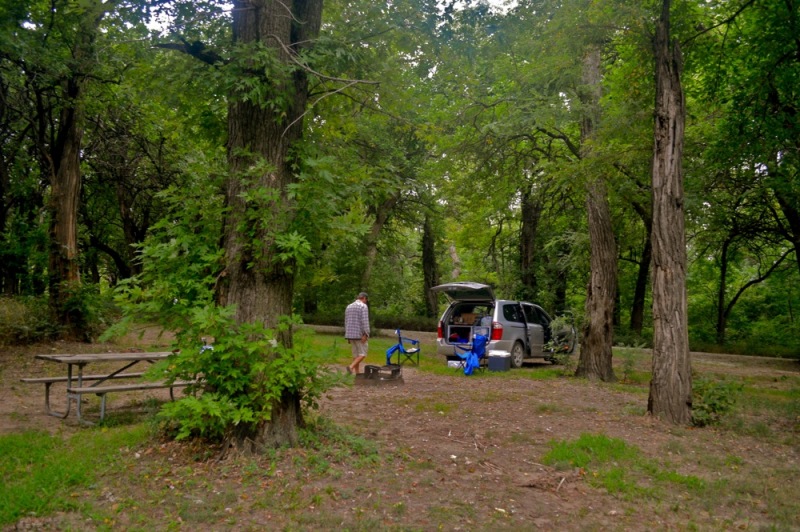 Yellowstone and the Grand Tetons in A Day

The Funky and the Bizarre: Hot Springs and Eureka Springs, Arkansas