That’s just me sweating. We pass strange bars, crystal shops, and the Gangster Museum. We’re not speaking to each other. Am I being a bitch or is it just the heat? Or the 80% humidity mixed with steam from the fountains and hot tunnel? We pass a decrepit hotel in silence. The Majestic. It’s a relic of the by-gone era of hot spring resort tourism, taller than anything else in town and all brick. There is one bathhouse that’s been preserved, called the Fordyce Bathhouse. It’s a National Park and free to tour. We part ways and I ascend the marble stairs solo, standing up straighter amidst the dapper charm. The Fordyce opened in 1915, with fountains, tubs and personal steam tanks that look like torture devices. I look up at the stain glass roof in the Men’s Bath Hall. 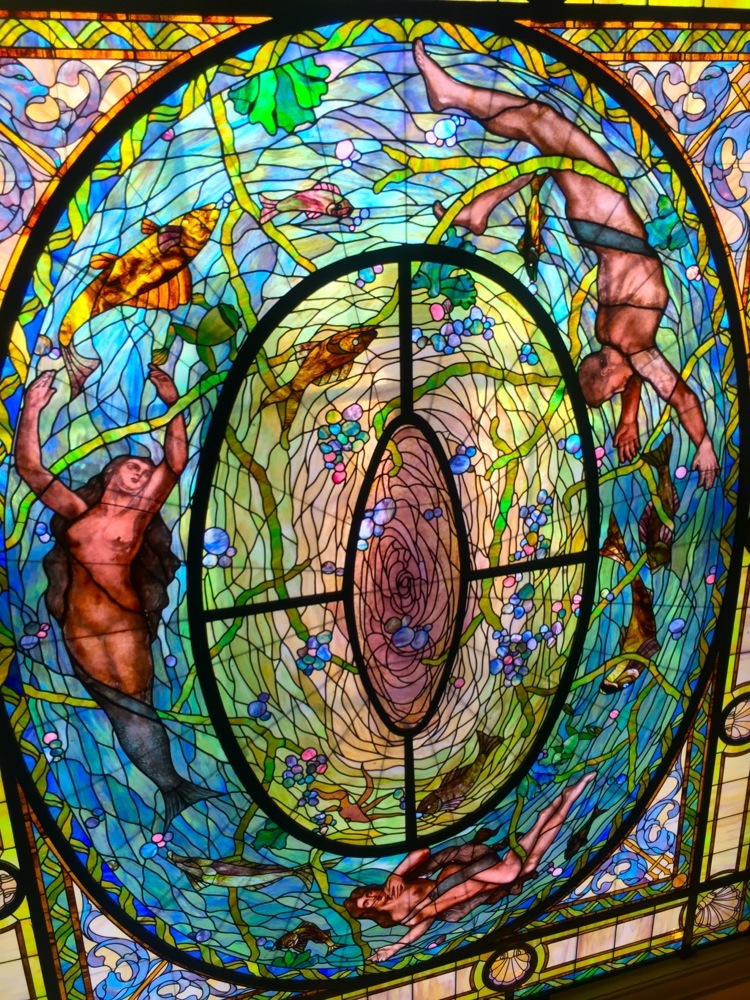 This place used to be “a hotbed for organized crime, [like] gambling, prostitution and bootlegging…and a popular hangout for Al Capone, Frank Costello, Bugs Moran, Lucky Luciano, and other infamous mobsters” until the 1960’s, according to http://www.hotsprings.org/pages/history/

The town is full of water spouts and fountains. I entertain the idea (briefly) of living here in the winter, emerging from my fabulous and well paying job to make another cup of chai right on the street, or leaning into my hot lover, piping mugs of tea in hand before a bathhouse date. I don’t really drink tea. But anyway it’s summer and the hot water everywhere just adds to the humid ooze that grips everything and turns it into an almost standstill. So still there’re no people drinking at the bar. 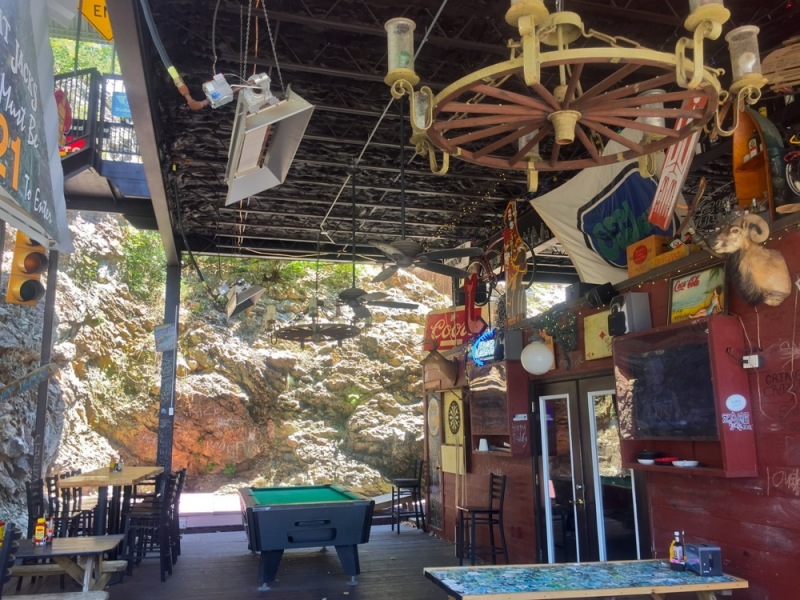 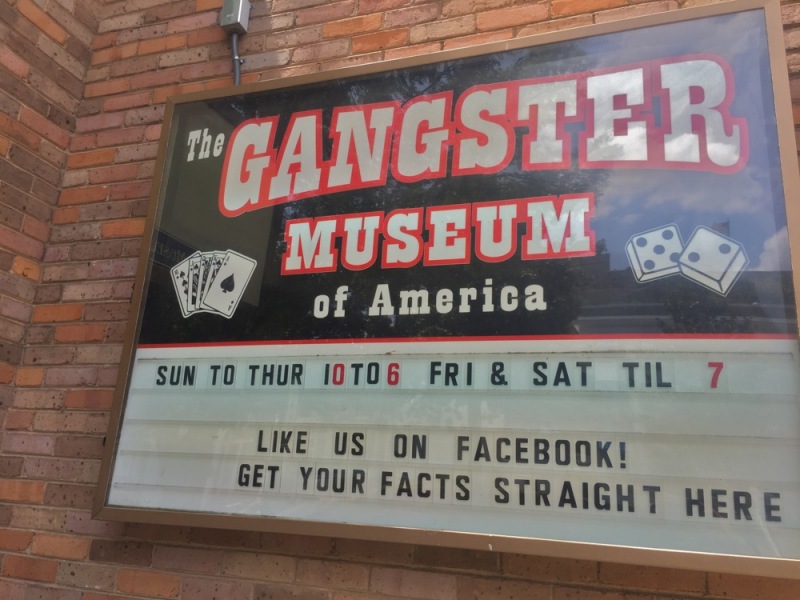 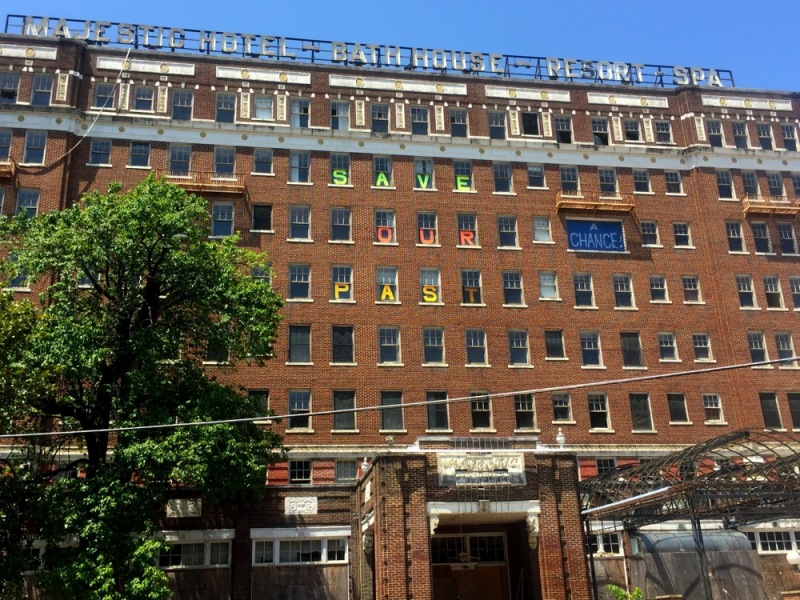 We were going to stay a while in Hot Springs, really. But even in the darkness the heat is overwhelming. I keep climbing down to the river to  douse myself. At least this water isn’t hot. There’s a cop that keeps circling the campground every half hour while we drink our cocktails (casually I hope) in coffee mugs at the picnic table.

We descend into Eureka Springs in the (cooler) green hills that might still be the Ozarks, past “the world’s largest tuned musical wind chime.” Now it’s more of a memorial to the man who built his dream, this roadside attraction, and has a framed newspaper article as if to prove its existence. The giant chime was the first sign that this town is a little, uh, different. There are springs, like a dozen, right in downtown. Including one inside a cave next to the sidewalk. I am downright charmed. Especially when we pass The Village Writing School, a little one-room schoolhouse looking place that hosts classes just on writing. And the free book exchange in front of another spring with guarded roman-esque stone dragons on either side. Or is it dogs?

Then there’s the town square that houses the main spring where a hippie is picking a mandolin, and I think that’s when I start smiling stupidly. We just happen to be here for the annual VW Weekend, so there are VW dune buggies, surfed out buses and other shiny relics rumbling past. We’ll see them all later drinking at the Cat House. Only because I asked where to get a drink in a cute little shop and the girl looked me up and down and said, “well, you don’t really look like Cat House material…” but I forgot what she said after that. Bitch. Back to the square. There’s someone singing upstairs on a verandah and it competes with Mandolin Man, but I’m suck a sucker for live music so I overlook the tangle. 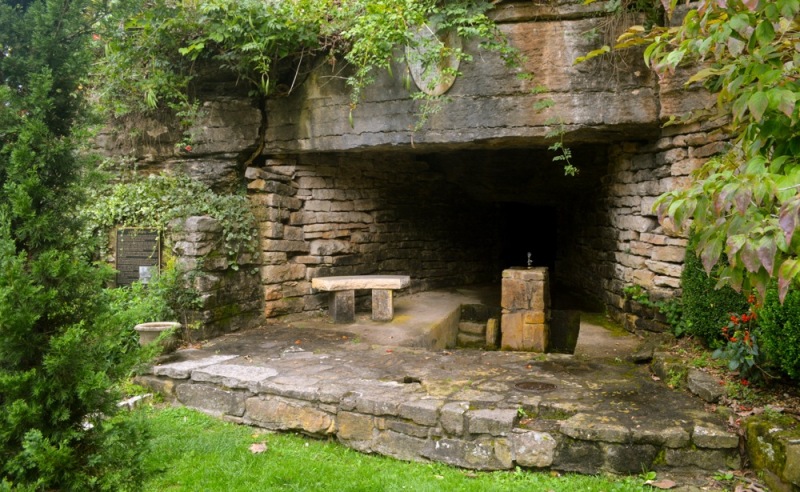 The town is full of well preserved cottages meant to lure honeymooners to come shack up in their digs. Or you can rent apartments above the winding streets of downtown.

As for eats, there’s Chelsea’s Corner Cafe, a divey bar (my favorite) serving pizza and pub fare that’s open late with live music. If you’re feeling classy, you can look out on the town over dinner on the rooftop of the Crescent Hotel, a palatial and historic building that proclaims itself the most haunted hotel in America. I didn’t have splurging money at this point so I didn’t have the honor, but maybe you will. http://www.crescent-hotel.com Spring for staying here and you can wear that floor length dress that will drag across the Crystal Ballroom, hand-painted lobby and their giant verandas. Of course there are trails that connect this megalith built on and of native limestone to the downtown.

I’ve never met a place that I wanted to shop so hard. How many cool shops can be in one town? I found a sort of pawn shop for restored jewelry, where I got an antique pure silver bracelet for $40. (This was not a splurge, it was necessary.) Turns out the piece was so pure it didn’t even tarnish when I left it on, soaking in a riverside hot spring in Idaho. But more on that later. There’s skull everything here. If you’re a skull junkie, beware, you will find everything you didn’t know you need. And I need this on my coffee table. 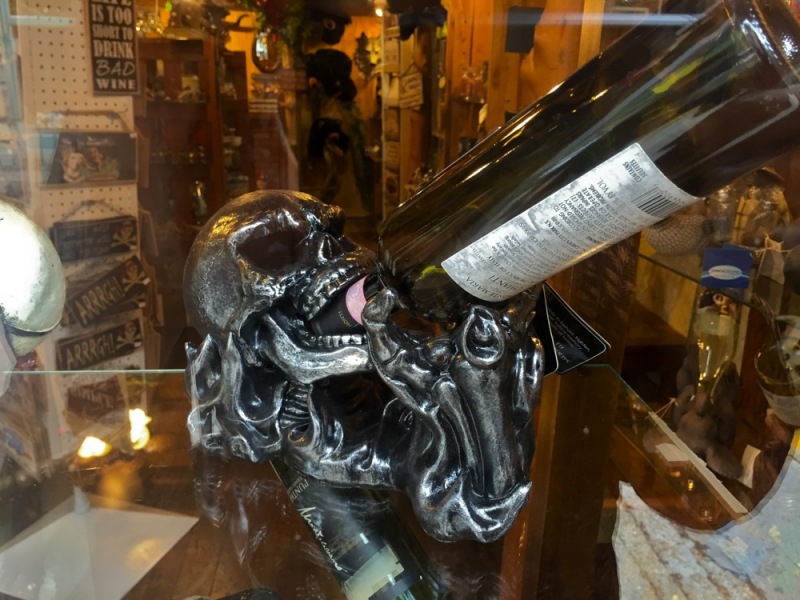 I walked around the hood. Called my mom. Up a muraled staircase, down another staircase between walls of rock layered like paper. I found a teenager fishing on a green lake, climbed hundreds of stairs past houses with giant crystals in the yards and Victorian-era architecture, all within less than a mile radius. Some houses have backyards where little caves can be seen in the rock face. What do they do in there? 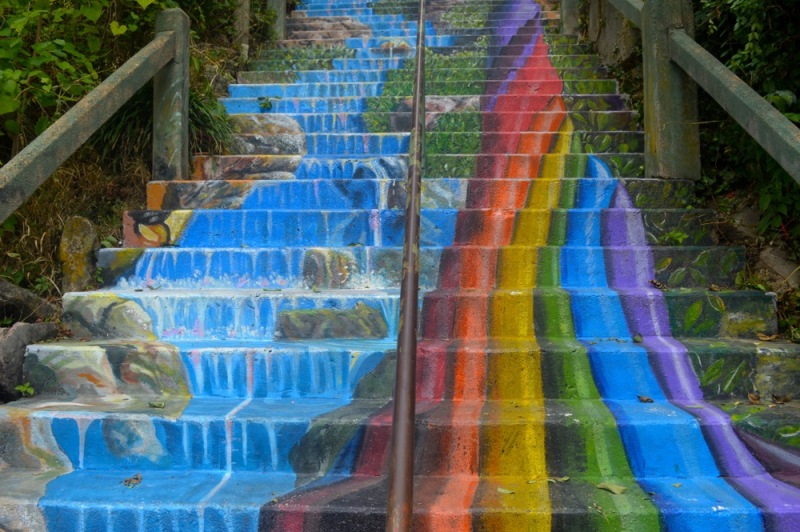 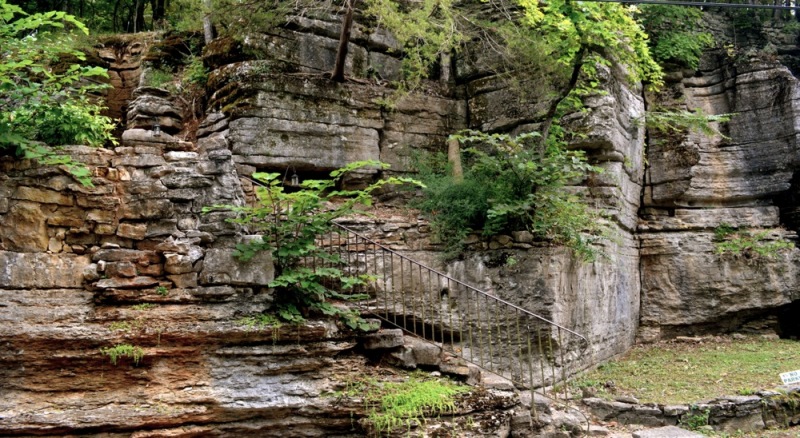 Street scenes: bizarre here doesn’t mean what it means elsewhere. It’s like the Haight meets Mill Valley meets Santa Cruz. If you’re not versed in Californism, forget it. There are weirdos here. The good kind. 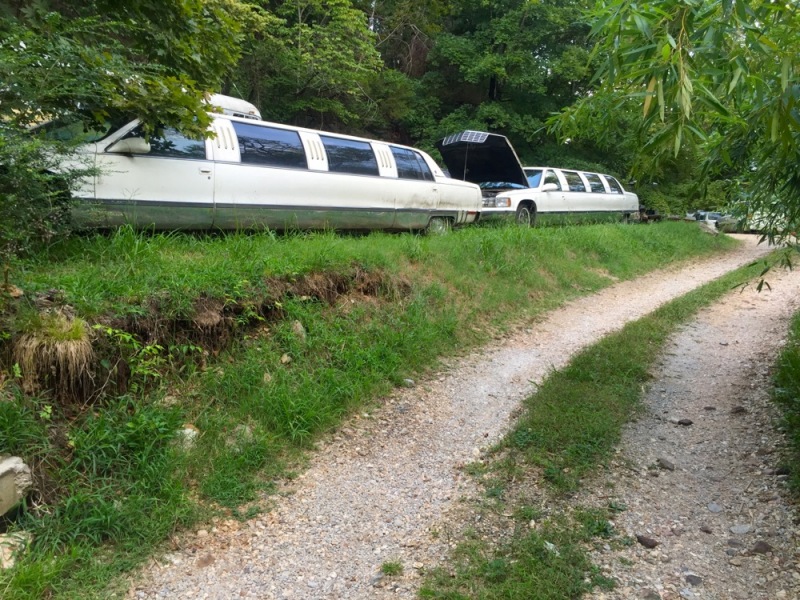 And a typical residence. 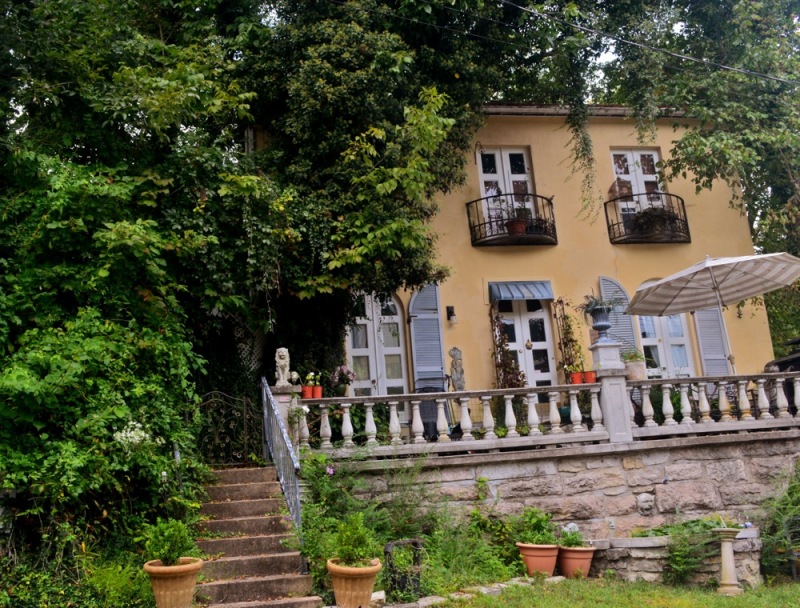 The whole main street has been raised to a higher level, and the town offers “underground tours” which are more of a history tour than a deep exploration of its tunnels (which they’re not permitted to show since they’ve been deemed unsafe) but cool nonetheless. We just don’t have towns like this in Hawaii. $12/person, 75 minutes. http://undergroundeureka.com/underground-tour.php

Just outside of town is Beaver Lake, known for it’s crystal clear water (indeed it is weirdly clear) where you can scuba dive. In the middle of the freaking country. I wanted to do this just to say I did, but then I remembered I don’t know how to scuba dive. But there’s a sunken town to explore if you do–which is really an old resort that went bankrupt, and got covered up when the dam was built that holds Beaver Lake back from the river that feeds it. See what people are saying about Beaver Lake on Tripadvisor. They just won’t shut up about it. Kinda like me talking about Arkansas. http://www.tripadvisor.com/Attraction_Review-g31582-d109343-Reviews-Beaver_Lake-Eureka_Springs_Arkansas.html