If you told me in Hawaii that I’d be going surfing by first donning a full wetsuit with gloves, booties and a hood (yes, you need a hood) I would’ve said whhhaaa? 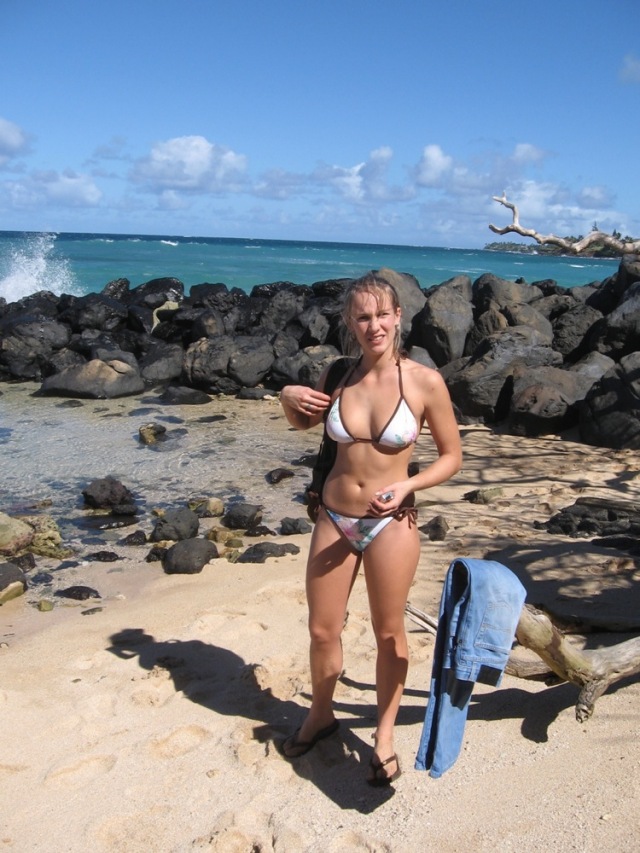 So here’s the deal. I moved to Washington to (finally) finish my degree, and my Hawaii born and raised boyfriend and I were like, hey, there’s ocean, we can still surf! Ha. We did, but it entailed driving two hours out to Westport, Washington. And through Aberdeen, home of Kurt Cobain and the sign that reads, “Welcome to Aberdeen. Come as you are.” And the little digital thermometer on a certain gas station that usually reads a temperature in the 40’s. Aberdeen is the last stop before Westport, which is a summer town and it’s virtually shut down the other 9 months of the year. So grab your fish tacos in Aberdeen. There’s also a Star Wars store here. Naturally. 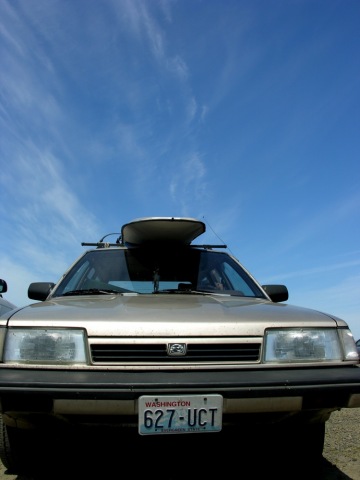 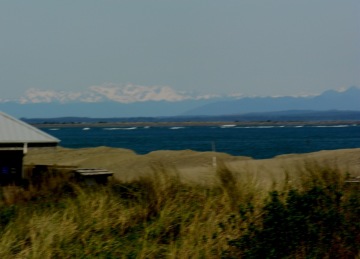 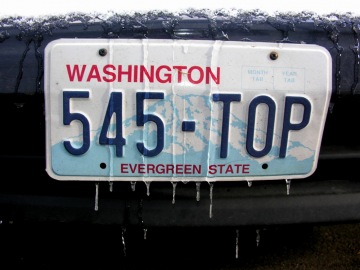 So we load up the boards and all of our neoprene. You need at least a 4/3 wetsuit for this kind of action. 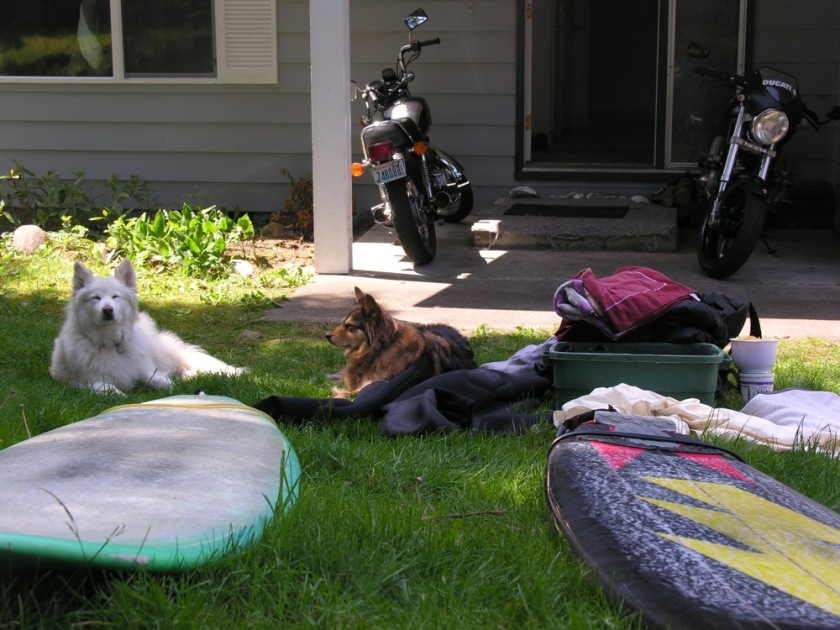 And head out to Westport. So in Westport, there are basically three spots to surf. Two along the inner harbor area and then the open ocean. If the ocean is too windy, the more protected spots along the rocks are better. The cool thing about the ocean is the entry protocol. Along the jetty on the northern end of the beach, there’s a rip current. You wade into the water right next to the rocks, plop down on your board, and let this narrow little rip carry you out to the break zone. You don’t have to paddle, you just whizz by electric orange and purple starfish and scuttling crabs, and paddle out into the break whenever it suits your fancy. Here’s the beach on an epic day: (Jetty is just out of sight to the right) 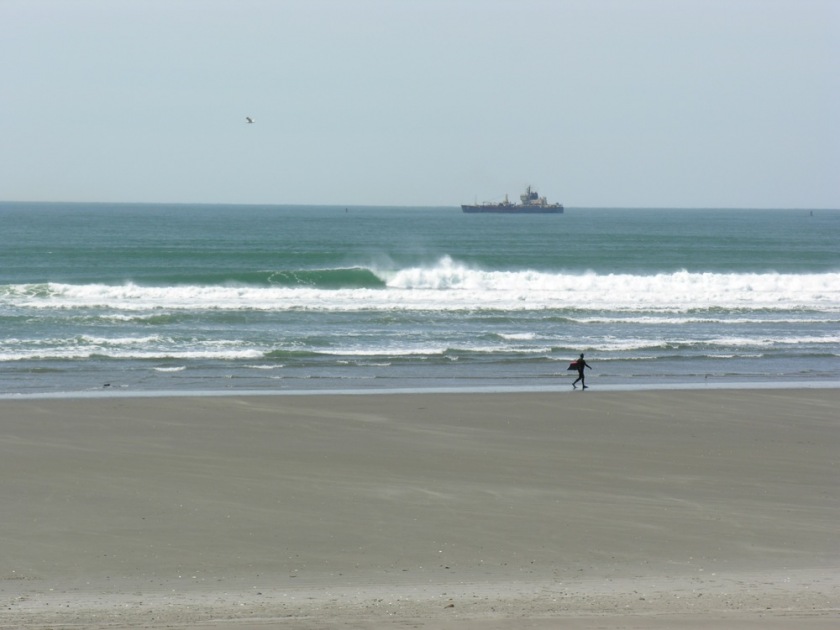 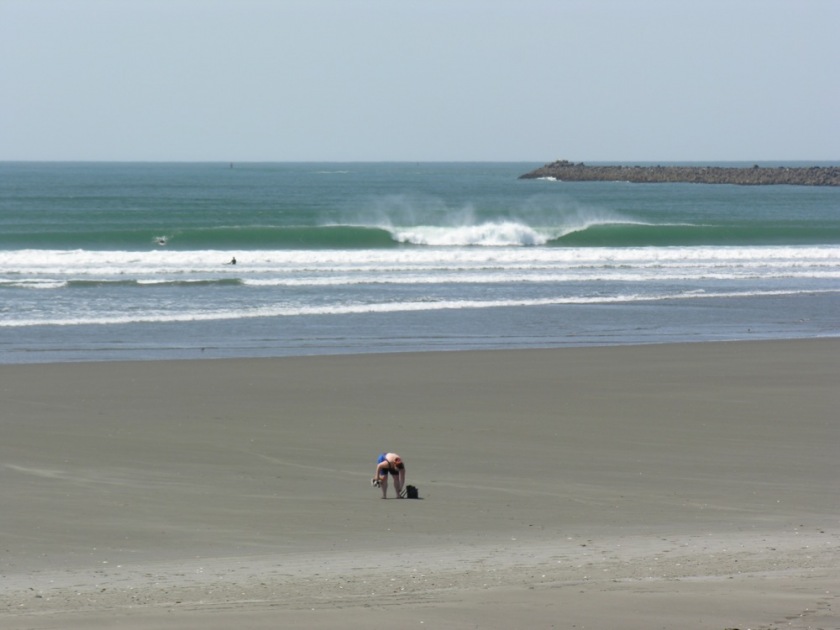 And one of the two inner harbor spots (they’re right next to each other): 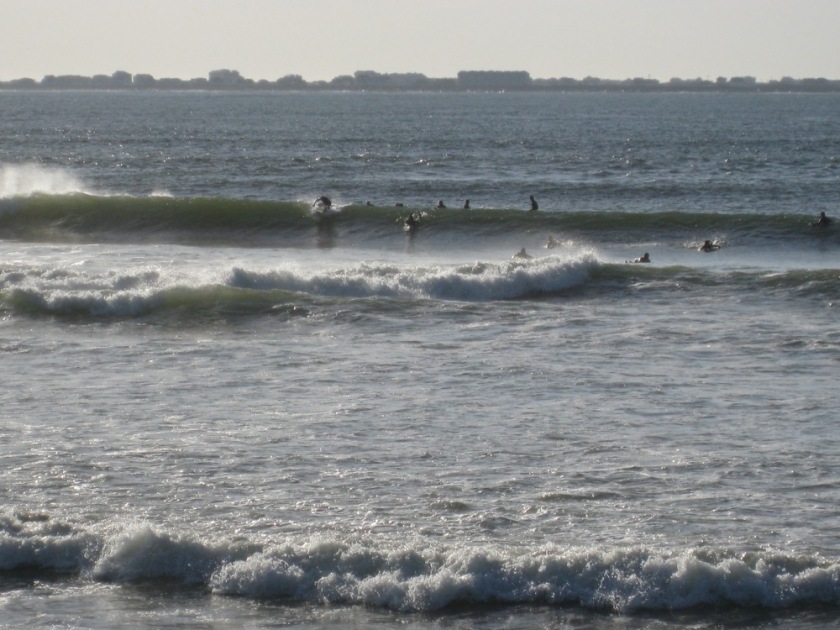 To get into the water, you climb over the big rock wall, next to stacks of crab catching-stuff. Look in the background. 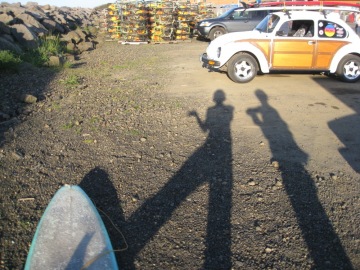 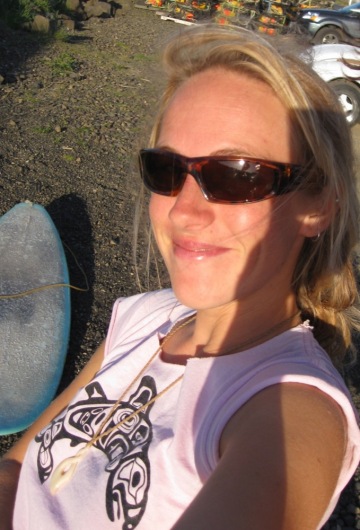 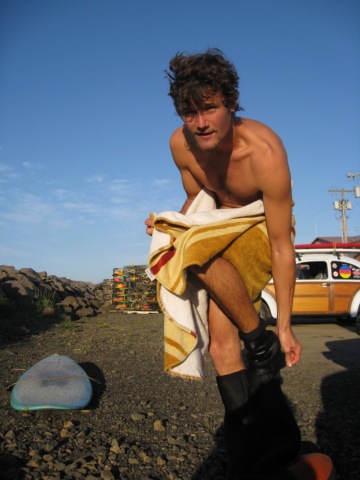 When we got bored of Westport, we tried driving out to the coast up north towards Forks. 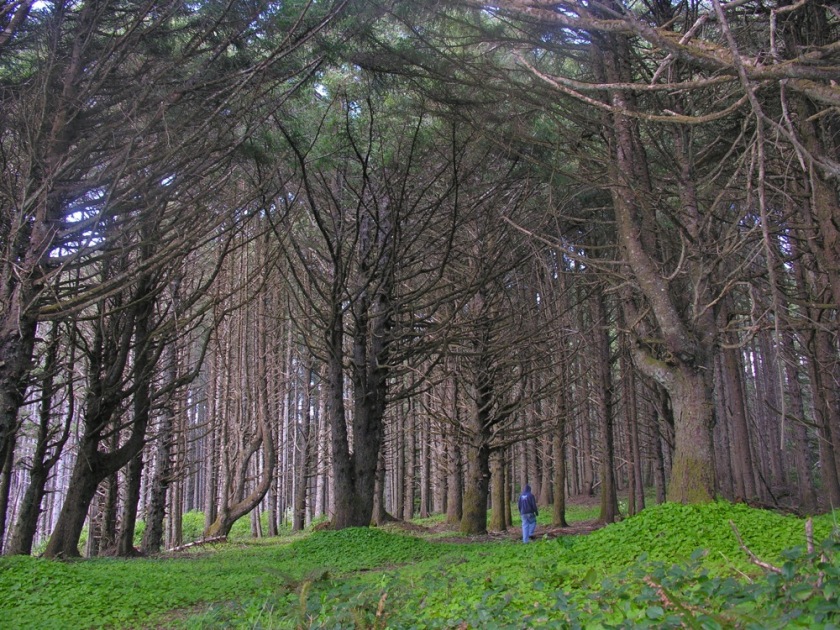 Did you know that Washington has the highest rate of coastal erosion in the world? This is no joke. Human built things near the water are being consumed by the ocean. This is just north of Wesport, nowheresville, where a house used to be. 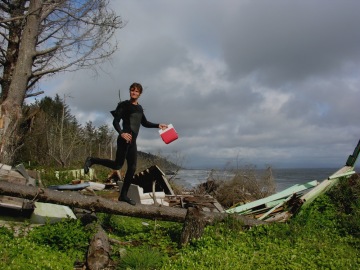 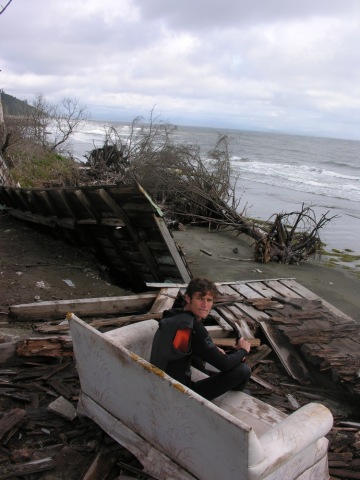 We continued north chasing waves, and ended up on the Quinalt Indian reservation. The road just- ended. But the waves were good! 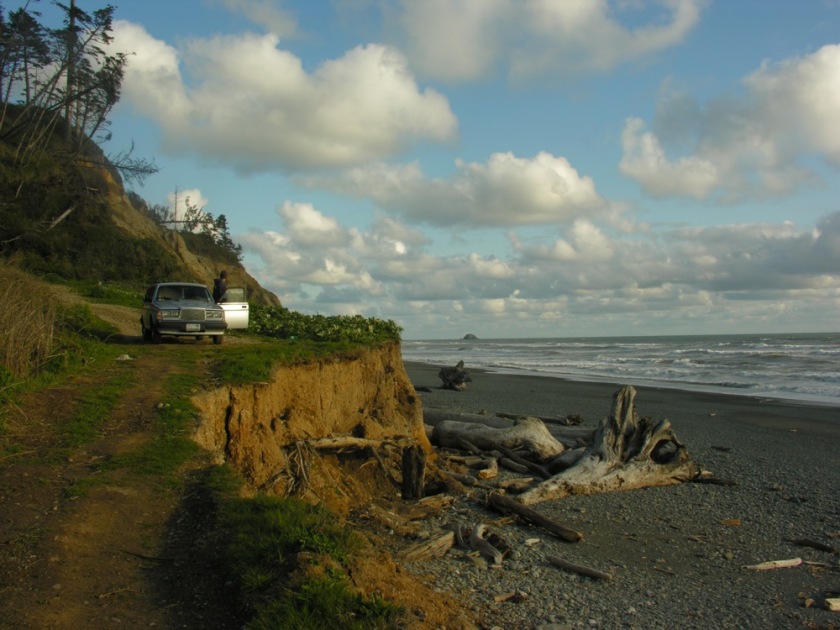 The coast here too is being consumed, and leaving behind.. giant sledgehammers. Occasionally my foot would hit something and I’d scream, thinking it was a shark. It was concrete. Chunks of it, from a former life of usefulness. 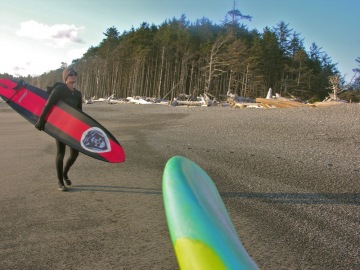 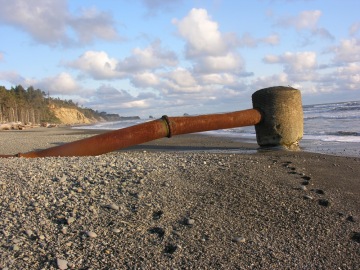 There are plenty of seafood dives right off the road. Here’s one with a sort of peculiar charm: 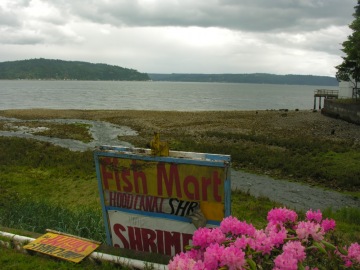 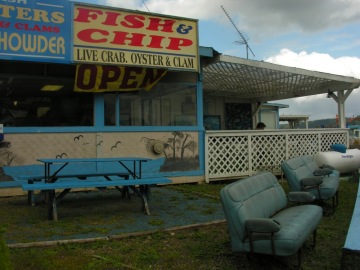 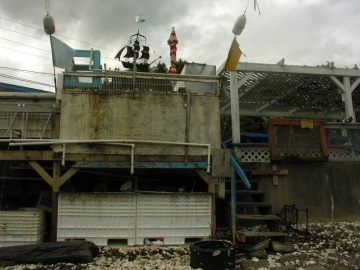 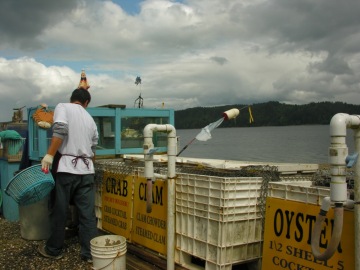 We also tried our luck on Southern Oregon. My favorite spot is in the town on Brookings, near the California line. There’s a great bagel shop there. That’s, uh, about it. But this spot a few minutes north of Brookings called Rainbows is awesome, and flanked by wildflowers in the summer. We didn’t see anyone else surfing here in the five or so times we went. 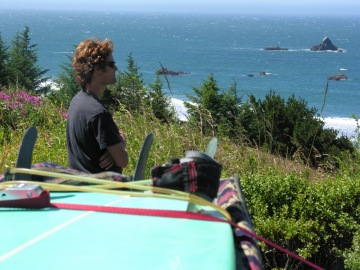 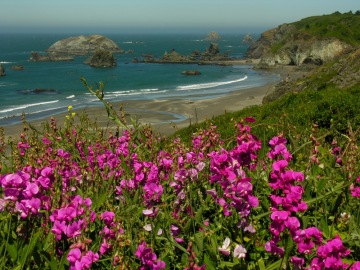 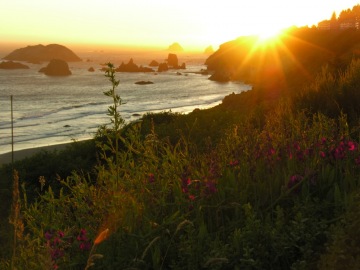 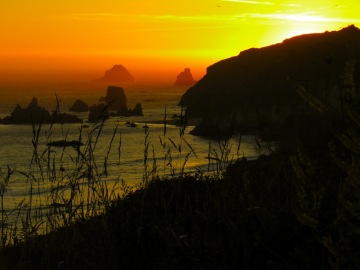 Driving in the fog happens mostly in the summertime and be a bit of a buzzkill. It usually burns off by mid-morning. When the wind comes up. It’s can be tricky to find the perfect window of time to surf in the Northwest. But if you don’t mind paddling out in blinding fog, the wind is usually calm and it’s kinda peaceful. 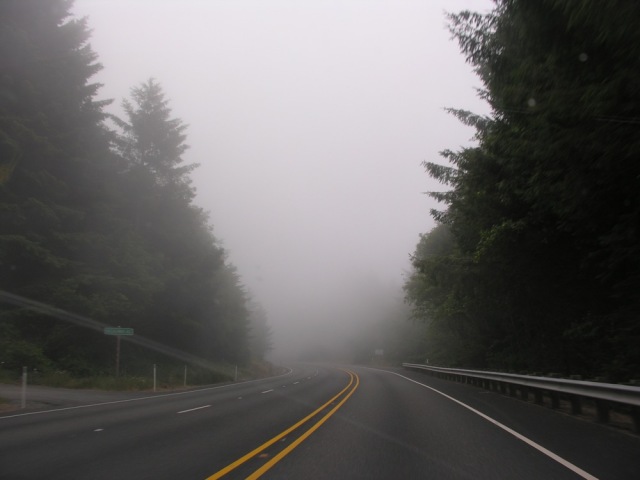 Here’s some scenes from driving the Southern Oregon coast: 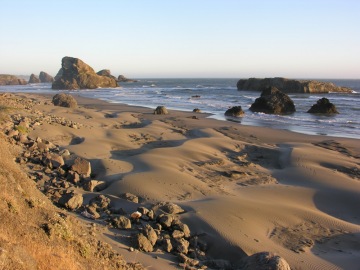 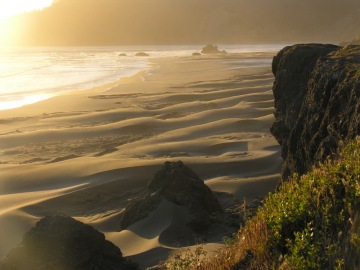 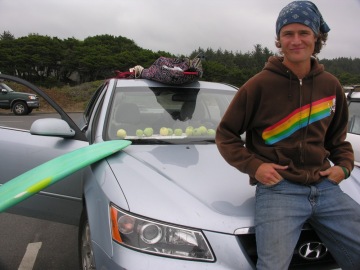 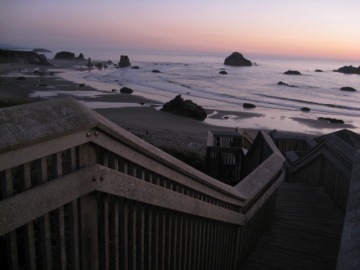 If you’re down this way, make sure to check out Highway 199, between California and Oregon. It’s winds between redwood trees and along the Smith River, which is exceptionally cold, clear and beautiful. It’s also one of my favorite rivers. Keep a look out for bridges- there’s one metal bridge near the southern end of the road with a killer white sand bar underneath like a tropical beach, and it’s really popular in the summertime. There are also lots of blackberries for the pickin around here.

Why I Really Need to Like Arkansas (aka Traveling Utah &