The land stretches out forever, broken only by the geriatric bowing of oil pumps. It’s so depressing it makes me want to throw up or cry. We keep expecting to see the Rockies appear but they’re tucked into the chem haze that smears everything gray. 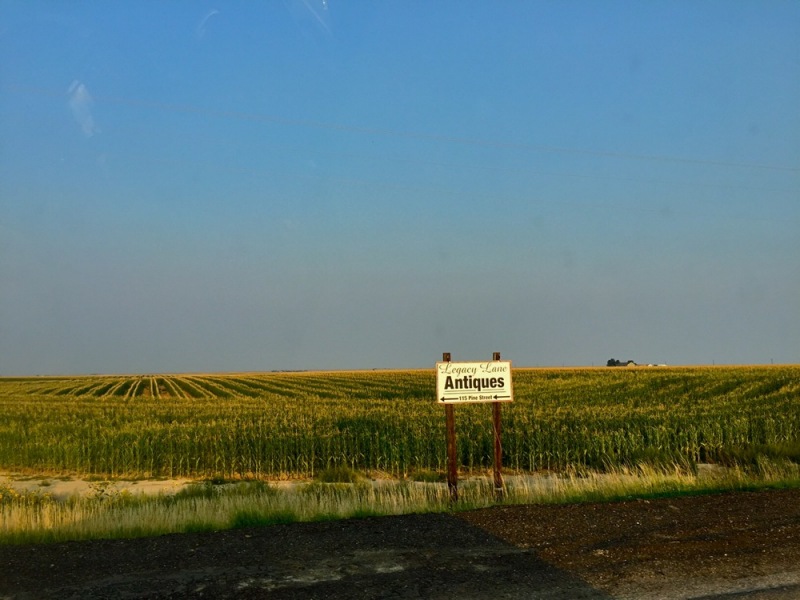 “Can’t you find something cool in Kansas? Just one thing,” TC says, looking over at the corn fields that have no end. If one ever ends, there’s a fence and another one starts. And we have hundreds and hundreds of miles of it. You can’t just breeze through Kansas.

I sigh. “Sorry to burst your bubble darling, but there’s nothing cool in Kansas. We’re fucked until Denver.”

TC gives me a look and there’s probably a smirk in there. Reverse psychology works as well on me as it does on a eight year old.

“So you got nothing huh? Not even one little thing?”

“Okay fine!” I say. “But it’s a game. And you’re up next so you better find something good.”

We don’t smile but I get to work. I circle places on the dog earned road atlas balanced on my knees and make notes on the side, googling and image searching until my eyeballs refuse to focus. My discovery has to be awesome, nearby in Kansas, and free. (Tough order.) And then I snicker because I’ve got something.

I direct us off the 85 mph highway–us and our hash, our hyper exotic Oregon license plate that magnetizes police cars, and the dull hum of nothing. Now we’re on the Prarie Trail Scenic Byway, 45 mph.

“You know this is going to prolong the misery,” TC says.

I didn’t know that the Byway would take us pass the World’s Largest Czech Egg, about the size of a car, perched on the sidewalk of a painfully unremarkable town. And through Lindborg, a mini-Sweden. You could probably find swedish pancakes and albion models jogging town’s eerily tranquil bike paths. We pass hills (hills!) and then we pull over so I can run through a field of waning sunflowers so big I can’t see the edges of it. It’s so dry that cracks yawn open, ready to swallow a mouse. Almost there.

Did you know that the scenic byways are empty in every state, even in summer? And the highways are full of people with mental problems. In Mississippi we were driving the interstate late at night when a SUV screamed by in the fast lane, going the opposite direction. I blinked. Did that just happen? We looked for miles for the nearest onramp and saw that he must have gotten on the highway the wrong way about 3 miles earlier. And we were talking about it, so clearly we weren’t dead from a head on collision. And later, there was the semi on fire. So yeah, fuck the highway.

I direct us down a dirt road. You could do 100 on if you wanted; dirt roads in Kansas are like driving on a salt plain. And they’re white and dusty. The only exciting thing that happens are turtles crossing the road. And when the road ends we’re parked in a giant meadow surrounded by mushrooms. It’s fucking incredible. Well they’re rocks but they look like giant mushrooms– leftover sculptures shaped by a long gone inland sea. This is probably the coolest thing at this latitude between Nevada and the Appalachians and I am smiling big.

“If I lived in Kansas I would come here on a full moon and do mushrooms!” I declare. “Haha!”

“Uhh. I don’t know if kids in Kansas are that crazy.”

“Maybe they do meth and make babies instead,” I say, and then I feel mean.

He just looks at me. 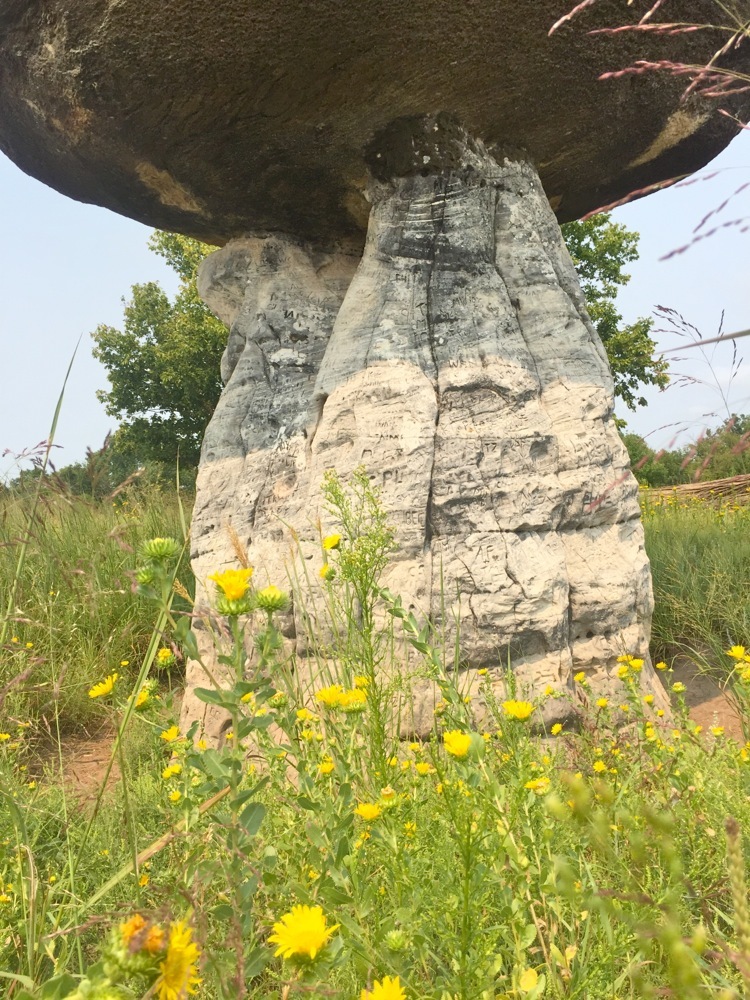 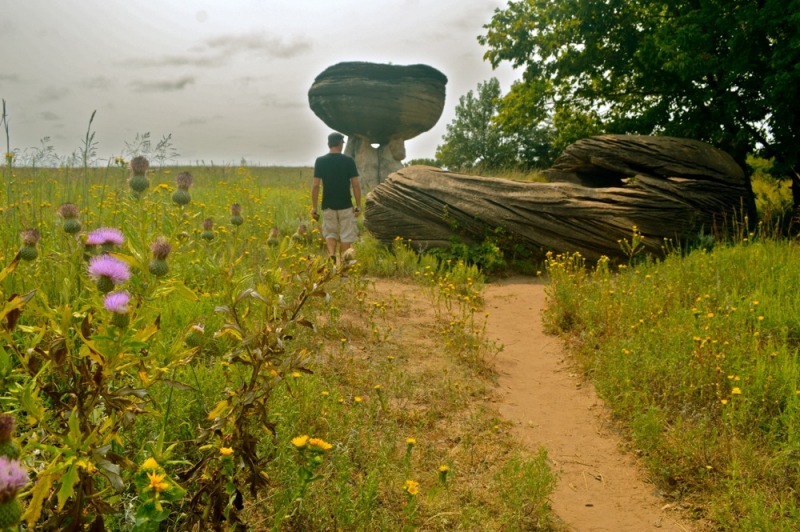 It’s Trusty Companion’s turn. Now we’re surrounded by waving grass, having turned at signs that say “K Street,” and other nap inducing names. If I lived in a boring place I would name the streets “Beam Me Up Lane” or “Magic Dust Place” or something cool. I go on a rant about public art. It could save Kansas! What if the state commissioned artists to do artsy things and put them at the edges of fields? They’d have such a captive audience! People could do stoney drives through the fields and get inspired and…I notice little outcroppings of white rocks popping up. 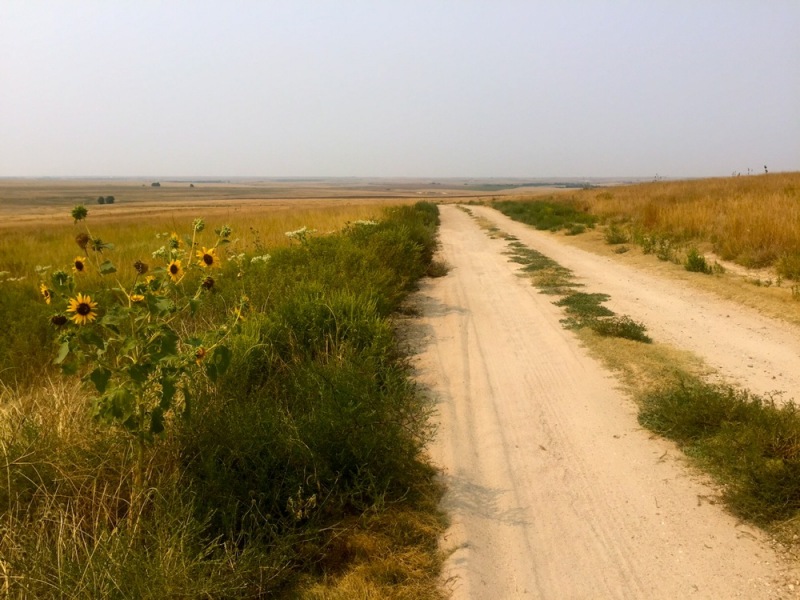 I drive 80 as instructed but start to brake when TC points out something odd. 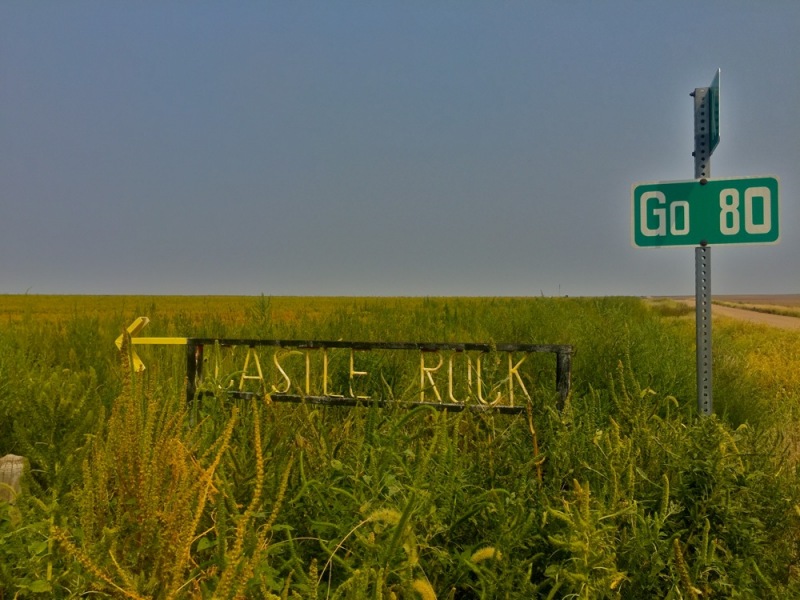 The sky is full of stuff. As the stuffs moves closer, they look like dried corn leaves. And they’re swirling.

“Tornado!” I scream and step on the parking brake.

The little twister hops onto the dirt road and I run out to it. Dry bits of things hit my face and arms and then it’s off, bending grass into the distance. I’m still smiling when we pull up to the Castle Rock. It’s this giant white thing, like the Taj Mahal, that just appears on the plane of boring. TC says it was a geographical marker for settlers pushing west in covered wagons.

“Not bad,” I say, and start making lunch. 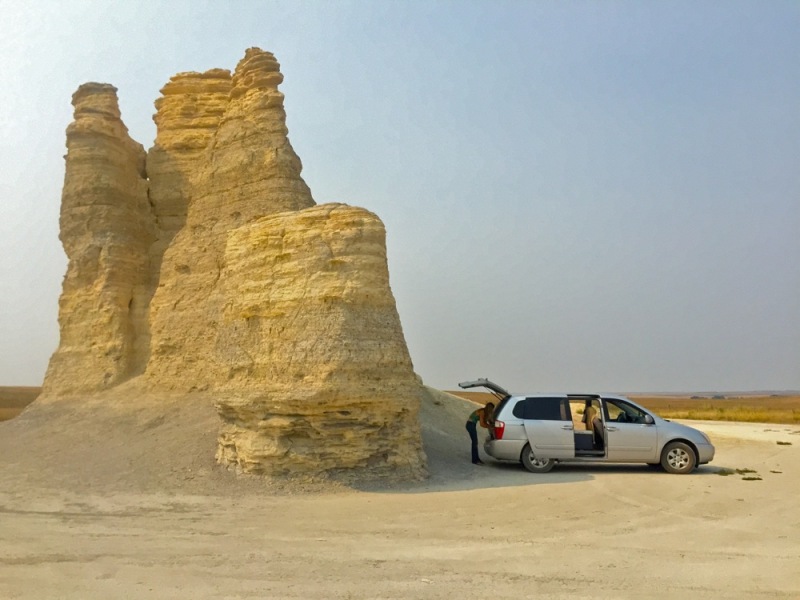 Miami: A Boy, An Alligator and a $45 margarita